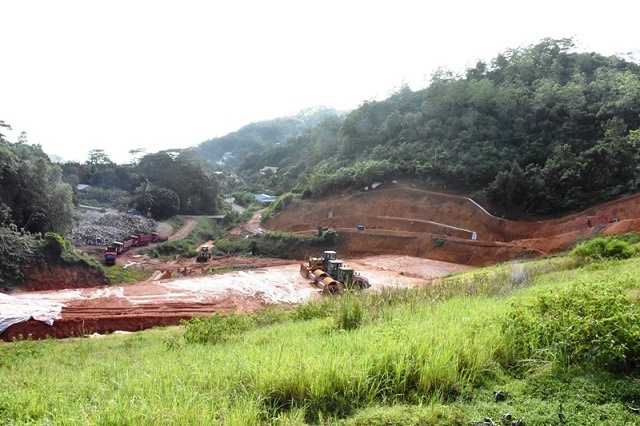 The project which was expected to end this year is now delayed and its completion is due in the first quarter of 2020. (Seychelles Nation)

(Seychelles News Agency) - Renovation work to raise Seychelles’ main water reservoir – La Gogue Dam – in order to increase its capacity is 25 percent complete, but the project is four months behind schedule because of a strike by truckers, the chief executive of the Public Utilities Corporation (PUC) said.

Work on the dam, which was built in 1969 in the northern Mahe district of Anse Etoile, will raise it six metres and increase its storage capacity by 60 percent.

PUC Chief Executive Philippe Morin was speaking to journalists following a site visit by President Danny Faure, last Friday. The project which was expected to end this year is now delayed and its completion is due in the first quarter of 2020.

“The project has been delayed by approximately four months and 10 days; four months when local truckers went on strike and 10 days due to unfavourable weather conditions,” said Morin.

“That has been resolved so we are all working to ensure that the project is completed by the expected time in March or April 2020. For the time being, the majority of the work is concentrated on the embankment which is the mound of various compositions of soil, sand, clay or rock and acts like a wall,” explained the chief executive.

According to Morin the dam currently stands at 144 metres in height and will measure approximately 151 metres once work is completed.

That will increase the reservoir's capacity by 600,000 cubic metres, making its total storage capacity 1.6 million cubic metres. Among the facilities to be installed will be a new water treatment plant with the capacity of treating 4,400 cubic metres of water per day that will help to ensure sufficient water supply for the northern region.

The project which started in November 2017 is being undertaken by the Sinohydro Corporation, a Chinese company based in Mauritius.

Morin said that an imperative phase of the project requires the dam to be completely drained to allow for pipes and other fixtures to be replaced and fitted. This is expected to be done by the middle of this year.

The dam is the principal source of water supplied to the north and central regions of the main island of Mahé but it also supplies water to other regions when necessary.

According to the chief executive, PUC has been working on the preparatory phases within the last two or three years to ensure that they have an adequate supply of water for the duration of time when the dam is drained.

“We expect that around June or July this year, the water level in the dam will be at almost zero percent to reinforce the embankment both from the inside and out. We also need to change all the pipes from the dam downwards and replace equipment and fixtures,” Morin added.

During that time water will be distributed from other freshwater sources including the Rochon dam, as well as the Hermitage, Le Niole, Cascade treatment plants.

The company also intends to increase the daily capacity of desalinated water by 4,000 cubic metres to increase supply when the reservoir is drained so as not to put a strain on other existing water supply.

Currently, there are four desalination plants on the main island of Seychelles – a group of 115 islands in the western Indian Ocean.