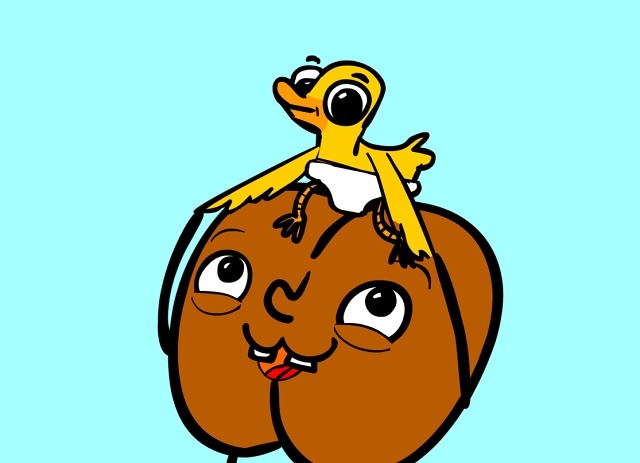 (Seychelles News Agency) - The Seychelles’ iconic and unique coco de mer has been turned into an animated character that the creator hopes Seychellois children will relate to.

Sam Debey, a digital animator living in the United States, worked on the first episode of the animated series while he was visiting his mother in Seychelles from December to January. The creator is calling his work ‘Coco de mer cartoon’ but there is a chance that the title may change as the series progresses.

Debey told SNA that he always dreamt of making an animation related to Seychelles but due to his busy schedule, he had to postpone the project. Having the local children in mind, Debey also wanted to give the Seychellois youngsters something to call their own.

“With the coco de mer the aim was to have something endemic to Seychelles -- something that kids can be proud of. It’s a show where they can watch a Seychelles-grown character instead of another character such as Spongebob SquarePants or other Disney cartoons,” said Debey.

He explained that having the coco de mer rather than another endemic species of Seychelles as the main character is something that goes back to his childhood. Growing up in Europe and the United States the only reminder of Seychelles for Debey was the coco de mer that stood in the family living room.

“Seychelles was a mysterious place that, even though I came here once as a kid at the age of four, it remained a foggy memory. Seychelles was always this coco de mer that we had in the living room and I loved it,” said Debey.

Other characters -- the octopus, fish, snail and birds -- in the show are also animals that can be found in the 115-island archipelago in the western Indian Ocean. Debey did not, however, draw them to represent any particular species. He said that Seychelles is full of beauty and form which he can draw inspiration from.

For the moment, a sample of the first episode of the series can be viewed on YouTube. Debey’s wish is to get a sponsor to make the series which will make production faster. He said that as a freelance animator, he relies only on the income he makes through his work, leaving little time for unpaid works.

Commenting on the process of production, Debey said that it is quite a time consuming to complete an animation as he needs to come up with the plot for each episode and draw the characters. It is only after he has finalised the storyboard that he can design the characters on his computer.

He added that having the series one day aired on television will be quite an achievement. Debey said that though the episodes will be short in length, ranging between one to three minutes, future episodes will communicate good messages.

“The animation has so much potential and it could relay great messages to children and adults alike,” said the animator, adding that the first episode is mostly humorous.

YouTube to block comments on most videos showing minors