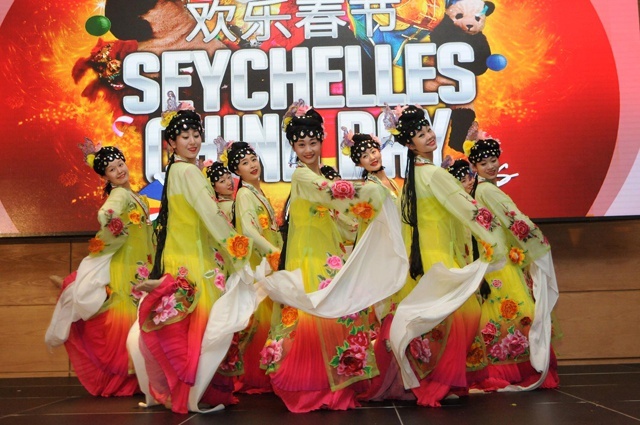 A performance by a female Chinese group dance during the Seychelles-China day festival in 2015. (Patrick Joubert)

(Seychelles News Agency) - A brocade fashion show of Chinese costumes and makeup, with the participation of both Seychellois and Chinese models, is on the programme for the sixth edition of the Seychelles-China day.

The January 25-26 event is organised annually as a celebration of the rich cultural and historical links between the two nations.

The 2019 edition is organized jointly by the Chinese embassy, the Culture Department, the Chinese Association of Seychelles and the Creative Industries and National Events Agency (CINEA).

“The Nanjing Yun Brocade Fashion Show will kick off the celebrations. The event will see Chinese costume being paraded, models will also wear Chinese make-up. That evening will see the participation of local model agency – Telly Modelling Agency – alongside their counterparts from China,” Gustave Decomarmond, the deputy Chief Executive of the Agency, told the press on Tuesday.

Chinese brocade is rich in colour and texture with patterns usually from Chinese folklore. “Yun in Chinese means cloud. Nanjing Yun Brocade was so named because it is as beautiful and as gorgeous as colourful clouds,” said the newly accredited Chinese ambassador to the island nation, Guo Wei.

Wei added that the event with the costumes, Chinese designers and makeup artists, will be a beautiful one.  The opening ceremony with the fashion show and an exhibition will be held at the Eden Bleu hotel at Eden Island.

Other activities on the programme include a cultural show by the Inner Mangolia Art Group. The group hails from Inner Mongolia which is in the north of China – a place known for its colourful cultural heritage.

The show to be held at the International Conference Centre of Seychelles will showcase folk music, songs and dance from that region.

“Right after the show we will open the spring festival and Chinese bazaar,” explained Robert Chong Seng, the chairperson of the Chinese Association in Seychelles – a group of 115 islands in the western Indian Ocean.

The spring festival or the Lunar New Year is the grandest festival in China. According to Chong Seng, “the family-oriented bazaar will showcase traditional performances such as the dragon dance, as well as the sale of handicrafts and the much loved Chinese food.”

This year the bazaar will be held early in the evening to allow organizers to recreate a Chinese ambience using lanterns.  For the first time, the embassy will have a stall amongst the 22 others where the public will have the choice to buy crafts and enjoy authentic Chinese gastronomy.

In 2019, the Chinese New Year falls on February 5, and according to the Chinese zodiac, this will be the year of the pig, which signifies wealth.

Chinese community in Seychelles to get new Chinese Cultural Centre