UK PM May refuses to rule out 'no-deal' Brexit 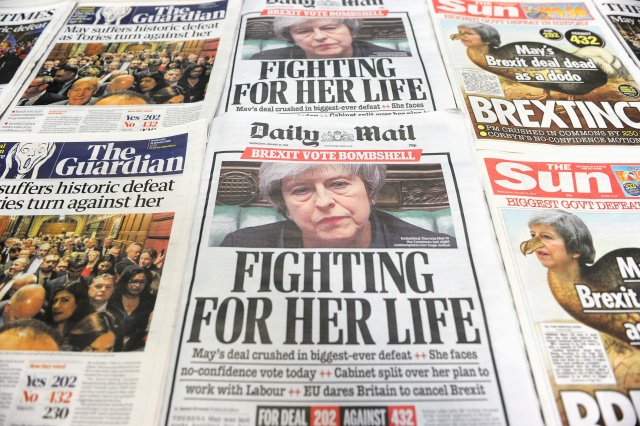 An arrangement of daily newspapers photographed in London on January 16, 2019 shows front pages reporting on the UK parliament's rejection of the government's Brexit deal. Prime Minister Theresa May was left "crushed" and "humiliated", Britain's newspapers said on January 16 as they raked over the fallout from parliament's huge rejection of her EU divorce deal. (DANIEL SORABJI / AFP)

(AFP) - British Prime Minister Theresa May scrambled to put together a new Brexit strategy after MPs rejected her EU divorce deal, and insisted she could not rule out a potentially damaging "no-deal" split.

The world's fifth-largest economy is in political turmoil and grasping for solutions that could smooth its planned departure from the bloc after 46 years just 10 weeks from now.

Governments across Europe are triggering plans designed to avoid logjams at ports and airports when trade barriers go up should London fail to find a Plan B.

The government held individual talks with MPs from rival parties after narrowly surviving a confidence vote brought on by the crushing defeat over her old deal with Brussels on Tuesday.

But Jeremy Corbyn, the leader of the main opposition Labour party, called the talks a "stunt" and refused to meet May until she ruled out the possibility of Britain crashing out without any future arrangements in place.

In a written response to him Thursday, the prime minister said it was "impossible" for her to rule out no deal without stopping the process altogether.

"It is not within the government's power to rule out no deal," she wrote.

May will present her new approach to the House of Commons on Monday. MPs will then have a chance to submit amendments before a full debate on January 29 -- exactly two months before Brexit date.

Downing Street on Thursday said May would miss next week's annual World Economic Forum meeting in Davos, which she was scheduled to attend, to focus on Brexit negotiations.

"I don't want it anymore than you do but I am saying to you we have to face reality," he told a Leave Means Leave rally in London on Thursday night.

Opposition MPs are pressing May to abandon the main principles that have guided her Brexit strategy for the past two years.

Corbyn insisted she must "ditch the red lines" that keep Britain from forging closer trade relations with Europe after Brexit.

He specifically mentioned maintaining a customs union with the EU that some businesses favour but May rejects because it limits Britain's ability to strike its own trade deals.

"Theresa May has to ditch the red lines and get serious about proposals for the future," the Labour leader told supporters in the southeastern town of Hastings.

Corbyn has previously accused May of trying to force MPs to back her plan by running down the clock until it is the only alternative to no deal.

British media reported that Corbyn was also asking party members not to engage with May's ministers as they hold separate lower-level talks across party lines.

He warned that Labour intended to hold another confidence vote "if necessary" as part of his bid for a general election that he says would resolve the impasse.

The Scottish National Party (SNP) is trying to rule out "no-deal" and secure a second referendum for which Brexit would need to be delayed.

"For any discussion between your government and the SNP to be meaningful, these options must be on the table," its parliamentary leader Ian Blackford said in a letter to May released after their meeting.

The Liberal Democrats are specifically seeking a referendum that includes the option of scrapping Brexit and keeping the UK in the EU.

"The government now needs to get serious about making significant changes to their own position," the Liberal Democrats said in a statement Thursday.

"The ball is ultimately in their court."

May hinted on Wednesday that Brexit might be postponed if London rallies around a single set of proposals that it could present to the EU.

EU negotiator Michel Barnier said on Thursday that Brussels would welcome proposals about a "more ambitious economic relationship" from May.

"I remain determined in the name of the European Union to work for an organised withdrawal," Barnier said in Lisbon.

The British pound has rallied over the course of the week on expectations of a postponement that keeps Britain from crashing out of the world's largest single market.

May's spokesman on Thursday conceded that EU officials had raised the issue.

But he added that a delay had not been formally discussed "because we do not wish to do it". The UK government maintains that Brexit day is March 29.

EU Commission spokesman Margaritis Schinas said EU leaders would only address the question if May decides to ask it.

Nevertheless, several diplomatic sources in Brussels confirmed that informal discussions of a delay had taken place while they wait for her next move.

The prime minister would face intense opposition from Brexit supporters in her Conservative party to any delay -- as she also would if she abandoned any of her key negotiating principles.