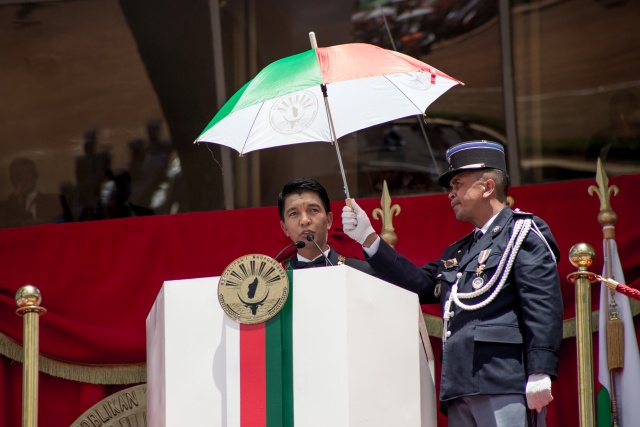 Andry Rajoelina speaks during the inauguration ceremony that officialy giving him the title of President of the Republic of Madagascar, at Mahamasina Stadium in Antananarivo on 19 January 2019. (RIJASOLO / AFP)

(AFP) - Madagascan President Andry Rajoelina used his inauguration speech on Saturday to pledge to fight corruption in a country where politics and business are widely seen as beset by graft.

Rajoelina regained power in the Indian Ocean by winning a second-round vote in December against Marc Ravalomanana after an election process in which both sides alleged they were victims of ballot fraud.

Rajoelina first ruled from 2009 until 2014 after he was installed by the army when then president Ravalomanana was ousted following violent protests.

"Nobody will be above the law, we will restore the values of the rule of law," Rajoelina said after being sworn in by nine constitutional court judges at a sports stadium in the capital Antananarivo.

Madagascar is ranked 155 of 180 countries on the Transparency International index.

Rajoelina also pledged to boost growth in one of the world's poorest countries, saying: "we will build industries in each provincial capital to create jobs."

The ceremony was attended by President Hage Geingob of Namibia and President Edgar Lungu of Zambia, as well as former French president Nicolas Sarkozy.

The two rivals were banned from running in the 2013 election as part of an agreement to end recurring crises that have rocked Madagascar since it gained independence from France in 1960.

Rajoelina, 44, is a former events planner and successful entrepreneur with slick communication skills.

Both candidates spent lavishly on campaigning, with promises and handouts distributed liberally to voters.