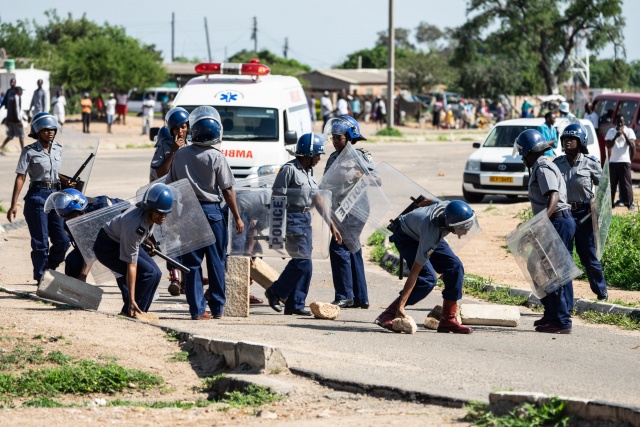 Police officers make way for an ambulance by removing stones from a barricade during a "stay-away" demonstration against the doubling of fuel prices on January 14, 2019 in Emakhandeni township, Bulawayo. Zimbabwe's President on January 12 announced a more than 100 percent rise in the price of petrol and diesel in a move to improve supplies as the country struggles with its worst fuel shortages in a decade. In the city of Bulawayo, demonstrators attacked minibuses heading to the city centre and used burning tyres and stones to block the main routes into town.
(Zinyange AUNTONY / AFP)

(AFP) - Zimbabwe President Emmerson Mnangagwa broke off a foreign tour Sunday, saying he wanted his country "calm, stable and working again" as criticism grew over a brutal crackdown in response to protests.

Mnangagwa appeared to take a more conciliatory approach than his spokesman George Charamba, who said the crackdown was "just a foretaste of things to come", as allegations mount up of shootings, beatings and abductions of opposition figures, activists and ordinary people.

The security forces' operation has underlined fears of a return to the violent repression of Robert Mugabe, who was ousted from power by the military 14 months ago.

At least 12 people were killed and 78 treated for gunshot injuries over the last week, according to the Zimbabwe Human Rights NGO Forum, which recorded more than 240 incidents of assault and torture.

The UN has criticised the government reaction to the protests, which were triggered by a sharp hike in fuel prices.

Mnangagwa, who was seeking much-needed foreign investment on the tour, announced his return on Twitter, scrapping plans to attend the Davos summit of world leaders this week.

"In light of the economic situation, I will be returning home after a highly productive week of bilateral trade and investment meetings," he said.

"The first priority is to get Zimbabwe calm, stable and working again."

He was in Kazakhstan on Sunday after travelling to Russia last Monday and then heading to Belarus and Azerbaijan.

Violent demonstrations erupted across Zimbabwe on January 14 after Mnangagwa announced petrol prices would more than double in a country that suffers daily shortages of banknotes, fuel, food and medicine.

He flew to Russia soon after making that announcement in a televised address to the nation.

Since last Monday, about 700 people have been arrested, the internet has been temporarily shut down twice, and social media remain largely blocked.

The United Nations human rights office on Friday urged Harare to "stop the crackdown" and voiced alarm over the security forces' "excessive use of force" which included reports of them using live ammunition.

It called on Zimbabwe's government "to find ways of engaging with the population about their legitimate grievances".

The army and police held a joint press conference late Saturday to deny any misconduct, saying some assailants raiding homes were wearing official uniforms to pose as security personnel.

Mnangagwa, 76, had pledged a fresh start for the country when he came to power in November 2017 after Mugabe was toppled, ending 37 years in office that were marked by authoritarian rule and economic collapse.

But Zimbabweans have seen little evidence of the promised economic revival or increased political freedoms.

Charamba, who was also Mugabe's spokesman, added "the state must deal with" the MDC opposition party and trade unions, which he said had "unleashed" the violence.

Charamba accused MDC leader Nelson Chamisa of seeking to win power "on the blood of the Zimbabwean people" by trying to overturn Mnangagwa's July election victory.

"The MDC and its affiliate organisations will be held fully accountable for the violence and the looting," Charamba, who is travelling with Mnangagwa, told the Sunday News.

Chamisa tweeted on Friday that his party was "committed to peace in solving the challenges that triggered the turmoil".

"Our country is going through one of its worst moments. My thoughts are with the victims of violence," he added.

South Africa, where hundreds of thousands of Zimbabweans have fled to seek work over the last 20 years, said Sunday that it was working to assist its neighbour, without giving details.

"If the situation is not attended to, the current economic challenges can derail the political and economic progress the country has made since the election of the new president," South African foreign minister Lindiwe Sisulu said.