Seychelles migration profile: immigration and employment at a crossroads 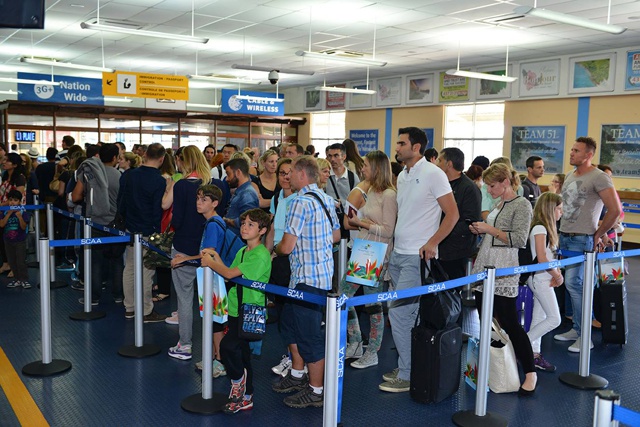 Visitors waiting to go through Immigration checks at the Seychelles International Airport at Pointe Larue. The total number of foreigners arriving to live in Seychelles reached 14,000 in January 2013 (Patrick Valmont, Air Seychelles)

(Seychelles News Agency) - A new report on migration in Seychelles has indicated that foreign workers, both skilled and unskilled, are flocking to work the small Indian Ocean island state from India, Madagascar, Philippines and Mauritius, while Seychellois workers are migrating to other countries in search of better opportunities and local youth’s unemployment has increased.

Between 2002 and 2010, some additional 3,000 foreigners arrived to live in Seychelles, which was mainly put down to construction industry boom and tourism development, according to a new report titled Migration in Seychelles: A Country National Profile, for the International Organisation for Migration (IOM).

The report also shows that between 2008 and 2012 there were 4,898 Seychellois who left the country permanently, immigrating primarily to the UK and France, and their departure was offset by an older generation of Seychellois returning from abroad to live in the country.

The migration profile (MP) was written by Michel Poulain, an emeritus lecturer from the Université Catholique de Louvain in Belgium and the Talinn University in Estonia, in collaboration with the Seychelles’ Department of Immigration and Civil Status, the Department of Information and Communication Technology (DICT) and the ministries of foreign affairs and labour and human resource development.

The report was handed over last week to the Principal Secretary for immigration, Charles Bastienne and his foreign affairs counterpart, Ambassador Maurice Loustau-Lalanne by a representative from the International Organisation for Migration (IOM).

In an address to launch the report, Bastienne told the audience that although expatriates contribute essential skills and labour to the development of the country, he warned that their numbers must be correctly managed to sustain the country’s limited resources.

“Immigrants are beneficial to the economy, but they must be selective and limited in number. The general opinion on the impact of the presence of foreign immigrants and tourists in Seychelles is rather positive even if certain voices will not be in favour of this statement.” Bastienne said. “For example, it has been stated that the presence of too many immigrants can lead to over reliance on a foreign labour force, in addition to putting pressure on infrastructure and the environment.”

Foreigners make up 24% of the Seychelles labour force

The findings of the report, Migration in Seychelles: A Country National Profile, may bring about some changes in policy of both the labour ministry and the country’s immigration department, who are tasked with the unenviable job of maintaining a balance on migration for the country’s sustainable development.

With a population of about 90,000 inhabitants, Seychelles economy relies on tourism and fisheries, and increasingly foreign labour. As of May this year there are 13,413 expatriates who work mainly in the Indian Ocean archipelago’s construction and tourism industries, compared to the 41,670 Seychellois in the nation’s labour force.

The MP says that ‘Seychelles’ labour force is relatively highly educated, with 47.4 per centof the employed population having secondary, 22.8 per cent having polytechnic and 6.0 per cent having university education’, but that 31.2 per cent of the persons having university or postgraduate level education were employed in jobs which they were overqualified for, while a quarter of secondary educated persons ‘occupied elementary jobs.’

Seychelles has no historically indigenous population. Most of its inhabitants are largely multi-ethnic descendants made up of the European colonials, freed African slaves and Indian and Chinese traders who settled on the islands some 250 years ago.

But although migration is entirely responsible for the entire root population of the Seychelles, it is also one of the greatest risk factors to the sustainable development of the islands, as it is the largest component of population change in Seychelles besides births and deaths.

Accurate measurement of the net flows of people both into and around the country is, therefore, very essential to obtaining reliable population estimates, which in turn lie at the heart of government policy decisions, resource allocation and service delivery.

The Seychelles boasts a high level of human development, attained through continuous government investment in social welfare services, including free education for all up to the post-secondary level. This makes immigration to Seychelles attractive to people throughout the world, and government has to exercise caution and strict immigration policies to ensure that the social services system and infrastructure does not become overburdened.

The 2010 census shows that Seychellois women have a higher tendency towards emigration than men, and also reveals high levels of immigration into the country for male foreign nationals.

Unemployment figures released on June 27 by the National Bureau of Statistics (NBS) for the first quarter of 2014 reveal an equally worrying trend – unemployment among the youth (aged between 15 and 24) stands at 11%, a level that the NBS has called “serious”, as it is 2.6 times higher than the national average unemployment rate of 4.2%.

As the MP report states, Seychellois generally do not wish to occupy low-skilled positions, however, for highly-skilled occupations in key sectors, expatriates are often preferred to fill posts. This leads to a number of skilled Seychellois emigrating in search of better career opportunities.

“It was pointed out during meetings for the preparation of this migration profile that no economy can prosper without hiring foreign workers, but uncontrolled increases in the numbers of non-Seychellois in the local labour market and of expatriated Seychellois could result in an unacceptable ratio between national and foreign workers,” reads the report.

“Consequently, there is a need for an integrated migration policy that aims to focus on ensuring the well-being of Seychelles society and the sustainable development of the country.”