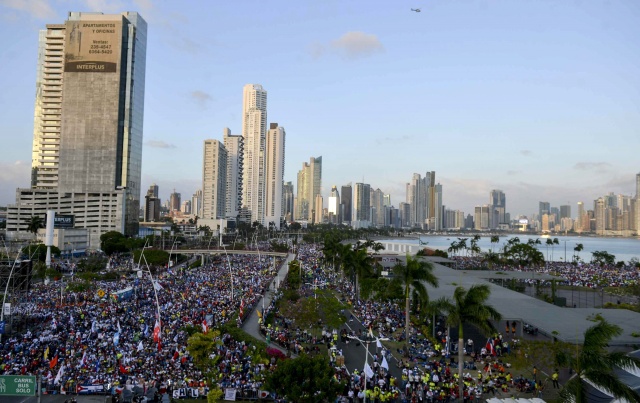 Pilgrims from all over the world crowd the historic center of Panama City on the eve of the arrival of Pope Francis for the World Youth Days, on January 22, 2019. (RAUL ARBOLEDA / AFP)

(AFP) - Pope Francis jets into Panama on Wednesday for a gathering of young Catholics that will likely see him speak out in defence of Central American migrants and human rights.

The festive five-day meeting with an expected 200,000 young people from around the world offers the 82-year-old pontiff a brief respite from a torrent of sex scandals that have jolted his papacy.

Groups of young pilgrims have been flocking into the small Central American country for days.

Wrapped in the flags of their nations, many resemble soccer fans on the eve of a major tournament, except this is one event in which they will be shouting for the same side.

At a Mass to open the festivities on Tuesday evening, tens of thousands of young pilgrims stood to chant, "this is the youth of the pope."

Panama's archbishop, Cardinal Jose Domingo Ulloa, told them the future of the church lay "in your vision of a better world".

Ulloa said he prayed the gathering "will be a balm for the difficult situation in which many... live without hope, especially the indigenous youth and youth of African descent, the youth who migrates after receiving almost no response from their countries of origin."

Tens of thousands of young pilgrims attended the colorful open air mass, near the capital's historic ramparts overlooking the Pacific end of the Panama Canal.

The pope's plane took off from Rome Tuesday evening and was scheduled to arrive in Panama City at 4:30 pm local time (2130 GMT), after a 13-hour flight.

Caravans of Central American migrants have travelled north through Mexico to the US border since October, stirring a debate over illegal immigrants and President Donald Trump's plans to build a border wall. Francis previously criticised plans for the wall during a trip to Mexico.

He used the 2016 World Youth Day event in Poland to call on conservative governments in Central and Eastern Europe to soften their resistance to migrants seeking refuge from conflict in the Middle East.

"Many of the young people who are participating in the WYD are immigrants themselves," Vatican spokesman Alessandro Gisotti said, adding that Francis could be expected to speak out on the issue.

The Vatican bills World Youth Day as a chance for the pope to reach out to young Catholics who he says "can change the world."

It is the sort of colorful event the people-friendly Argentine pope revels in -- a world away from the strains of sex scandals that have rocked his six-year papacy.

The most recent scandals struck in the United States, where priests and bishops in several dioceses are under investigation for decades of sex abuse of minors.

The pope met with victims of clerical sex abuse during his last visit to South America, to Chile and Peru, a year ago. The Vatican says there are no formal plans to do so on this trip.

However, two abuse survivors from neighboring Costa Rica have asked to meet with Francis on the sidelines of the WYD.

Michael Rodriguez, 38, and Anthony Venegas, 33, told AFP they sent a letter to Francis requesting a meeting but received no reply.

"We managed to deliver a letter to the pope with the help of another person. We told him that we would love to have an audience with him, tell him face to face what we have experienced, give him conclusive proof," said Rodriguez.

Francis will hold two open-air masses in Panama City. Among the other highlights of his five-day visit will be a trip to the Good Samaritan home for young HIV and AIDS patients on Saturday, after the closing mass.

He will also take a short helicopter trip outside the city to Pacora to visit a youth detention center and hear the confessions of inmates, including one serving time for murder.