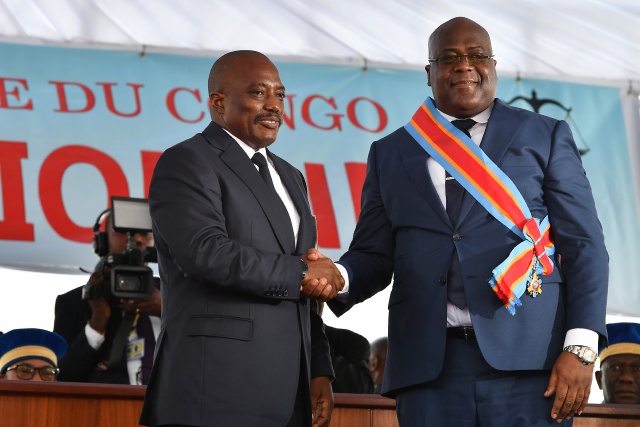 Democratic Republic of the Congo's outgoing President Joseph Kabila (L) shakes hands with newly inaugurated President Felix Tshisekedi on January 24, 2019 after he was sworn-in in Kinshasa. Opposition leader Felix Tshisekedi was sworn in on January 24, 2019 as president of Democratic Republic of Congo, marking the country's first-ever peaceful handover of power after chaotic and bitterly-disputed elections. Tshisekedi took the oath of office before receiving the national flag and a copy of the constitution from outgoing president Joseph Kabila, stepping aside after 18 years at the helm of sub-Saharan Africa's biggest country. (TONY KARUMBA / AFP)

(AFP) - Opposition leader Felix Tshisekedi was sworn in on Thursday as president of Democratic Republic of Congo, marking the country's first-ever peaceful handover of power after chaotic and bitterly-disputed elections.

Tshisekedi took the oath of office before receiving the national flag and a copy of the constitution from outgoing president Joseph Kabila, stepping aside after 18 years at the helm of sub-Saharan Africa's biggest country.

A moment of drama was injected into the ceremony when the newly-minted president was taken ill during his inauguration speech.

After a 12-minute interruption, Tshisekedi returned to the microphone, saying: "A famous president of our country said in his time: 'understand my emotion'."

He was quoting the dictator Mobutu Sese Seko, who said those words in 1990 as he was announcing the end of single-party rule.

"The campaign we had to run... got the better of me," Tshisekedi added, apologising for the interruption as Kabila looked on impassively through his trademark dark glasses.

Thousands of Tshisekedi supporters, many of them dressed in white, celebrated the historic event outside the Palace of the Nation, the seat of the presidency.

"We hope that this will be a real change, especially as he has taken power without bloodshed," said Saddam Kongolo, a member of Tshisekedi's Union for Democracy and Social Progress (UDPS).

One of Tshisekedi's first tasks will be to appoint a prime minister in a move which will see him sharing power with Kabila's supporters, who hold an overwhelming majority in parliament.

The ceremony caps more than two years of turmoil sparked by Kabila's refusal to step down when he reached the constitutional limit on his term in office.

A country the size of continental western Europe, the former Belgian colony lived through two regional wars in 1996-97 and 1998-2003.

The ballot, which took place on December 30 after three postponements, surprised many by the lack of violence, but a political storm swiftly brewed over the vote count.

Tshisekedi was declared winner with 38.5 percent of the vote, over his opposition rival Martin Fayulu, who was credited with 34.8 percent.

Fayulu branded the result a fix but lost a challenge to the Constitutional Court, and foreign support for his position ebbed.

Among foreign nations attending the ceremony, Kenya and Zambia were represented by their presidents and Tanzania by its vice presidents, according to state television, while China, France, Japan and the United States sent their ambassadors, AFP journalists saw.

Tshisekedi took over the UDPS, DR Congo's oldest and largest opposition party, after the death of its founder nearly two years ago, his father Etienne.

His ascent to the presidency has taken many people aback, for he has never held high office and failed to match the crowd-pulling popularity of his father.

He must defuse the anger of Fayulu's supporters, carry out his pledge of ending the "gangrene" of corruption after the Kabila era, and forge a power-sharing arrangement with the outgoing president's bloc.

The pro-Kabila Joint Front for Congo (FCC) controls 337 seats in the 500-member National Assembly against 102 for Fayulu's coalition, Lamuka, and 46 for his own coalition, Heading for Change (Cach).

According to a "political coalition agreement" seen by AFP which outlines an arrangement for "power-sharing" between the FCC and Cach, the position of prime minister will be rotated every five years.

The defence, foreign affairs and interior portfolios will go to "the president's political family".

Kabila himself will become a senator for life under the constitution. He is widely expected to wield influence through his supporters.

His family has acquired a wide range of assets during the many years in power.

Beyond politics, Tshisekedi has to root out brutal militias who control parts of the country's strife-torn east where an Ebola epidemic is also unfolding.

He also has to meet expectations about easing poverty, which afflicts the vast majority of the country's 80 million citizens.

Despite the poverty, DR Congo boasts a treasure trove of minerals, ranging from gold and diamonds to copper and coltan -- a mineral essential for the batteries used in hand-held electronic devices.

Very little of the wealth trickles down to the poor. It ranks a mere 176th on the 189-nation Human Development Index compiled by the United Nations' Development Programme (UNDP).