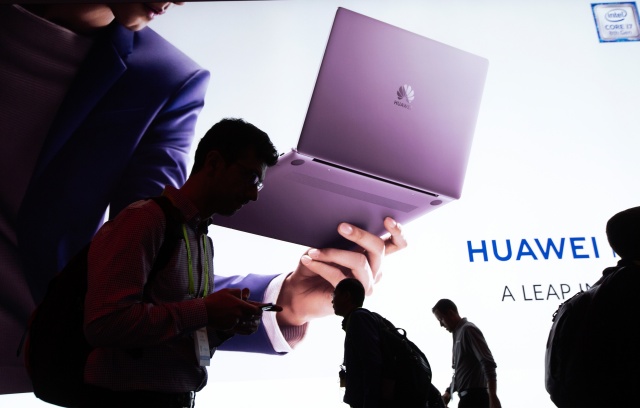 People walk by the Huawei exhibit at the the Las Vegas Convention Center during CES 2019 in Las Vegas on January 8, 2019. (DAVID MCNEW / AFP)

(AFP) - The US Justice Department on Monday unveiled sweeping charges against Chinese telecommunications giant Huawei in two cases likely to ratchet up tensions between the two superpowers -- including that of a top executive arrested in Canada on a US warrant.

The department unveiled 13 charges against chief financial officer Meng Wanzhou -- the daughter of the company's founder who is currently out on bail in Canada -- and three affiliates related to violating US sanctions on Iran.

Her case has sparked a major crisis between Ottawa and Beijing, with Washington in the middle.

In addition, 10 US federal charges were filed against two Huawei affiliates for stealing robot technology from T-Mobile.

Meng -- who was arrested at in Vancouver on December 1 at Washington's request -- is expected to fight extradition to the United States, amid heavy pressure on Canada from Beijing, whose subsequent detention of two Canadians is seen as an act of retaliation for Meng's arrest.

Acting US Attorney General Matthew Whitaker said the extradition request would be sent by a January 30 deadline.

A hearing is set for February 6.

Whitaker said there was nothing in the indictment that alleged Chinese government involvement in either case.

However, he added, "As I told Chinese officials in August, China must hold its citizens and Chinese companies accountable for complying with the law."

General » Be a reporter: Write and send your article » Subscribe for news alert
Tags: US, China, Canada, telecoms