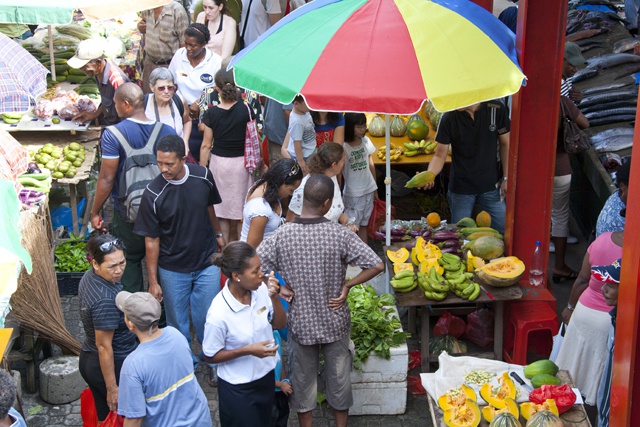 A typical day of Seychellois people going about their shopping for fruits, vegetables and fish at the Victoria market. The latest United Nations Development Programme's Human Development Index, has seen the Indian Ocean island nation going down in the rankings from 46 in 2013 to 71 in 2014. (Gerard Larose, STB)

(Seychelles News Agency) - The results of the latest edition of the United Nations Development Programme (UNDP)’s Human Development Index, has seen the Indian Ocean island nation gone down in the rankings from 46 in 2013 to 71 in 2014.

The Human Development Index is an annual report which measures human development levels among 187 countries across the world.

The index’s findings reveal that more than 2.2 billion people throughout the world are either near or living in poverty on various levels such as poor health, lack of education, inadequate living standards, lack of income, disempowerment, poor quality of work and threat from violence.

Forty countries assessed are deemed to have a “very high human development” and top of the group are Norway, followed by Austria, Australia, Switzerland and the Netherlands.

Despite the obvious inconsistencies between the 2013 and 2014 indices, the UNDP has insisted that the method of compiling data has changed, and that Seychelles’ ranking, which was the highest in Africa last year, followed by Libya and Mauritius in second and third place respectively, should not be compared to the previous years.

However, precisely the same disclaimer is made in the previous report for 2013, which states in its explanatory note that “it is misleading to compare values and rankings with those of previously published reports, because the underlying data and methods have changed.”

Speaking to members of the media at a press conference on Friday, Seychelles’ Minister for Finance, Trade and Investment, Pierre Laporte, has said that the new method of compiling data, such as revenue, food prices, health, life expectancy, education and security, which means that had the same formula been used as for 2013, when Seychelles ranked 46, the index would have given it a ranking of 47.

“We are not very happy about the report and the Ministry of Foreign Affairs shall be making a formal protest to the UNDP and other UN agencies,” said Laporte.

In the 2013 report, Seychelles’ HDI value was listed at 0.806, which placed the country in the “very high human development” category. However, due to the subsequent change in their methods of calculation, the UNDP ignored the previous value in the report, re-calculating 2013’s HDI value to 0.755 for 2013 and 0.756 for 2014.

Minister Laporte said that important data on various components of the index were not utilized, although it appears they were sent to the relevant UN agencies on time.

Data sets for the report are sent by each country to various international organizations on different topics such as the United Nations Educational, Scientific and Cultural Organization (UNESCO) for educational data, to the World Health Organization (WHO) for health-related figures and to the International Monetary Fund (IMF) and the World Bank for economic statistics.

The minister pointed out that Gross Domestic Income (GDI) per capita now stands at $15,600, although the report only lists the figure at $13,231.

While unemployment in Seychelles is at such low levels that it is virtually non-existent compared to other countries, the report makes no mention of the employment situation.

At the press conference, the UNDP’s Mauritius-based Programme Manager for Seychelles and Mauritius, Roland Alcindor, noted that while Seychelles enjoys extremely high levels of employment, 1.5 billion people, or one fifth of the world's population are unemployed or unstable in their jobs, because of natural or man-made causes such as conflict.

The Gender Inequality Index (GII) reflects gender-based inequalities in three areas: reproductive health, empowerment and economic activity – all areas in which Seychelles has proven itself to perform very well. However, the report states that “due to a lack of relevant data, the GII for this country has not been calculated”.

The Multidimensional Poverty Index (MPI), which uses household surveys to calculate deprivation levels in education, health and living standards, was also not calculated for Seychelles due to an apparent lack of data.

Laporte noted however that the mean years of schooling 9.4 both male and female is also cause for concern and clearly calls for remedial measures.

He deplored the fact that performance of 15 year old students for such essential subjects as reading, mathematics and science was non-existent in the report.

Though the report states that life expectancy has improved marginally, the report contains no information about HIV prevalence and prevention in Seychelles.

Penalized for fighting drugs and piracy

Laporte said that some factors like the prison population of 709 inmates - one of the world's highest number of inmates per capita, thanks in part to the Seychelles’ governments war on drugs and assistance in prosecuting suspected pirates from the Horn of Africa - has helped drag the country down in the ranking.

Proportionally, Seychelles has the third highest prison population, after the USA, St Kitts & Nevis, and surpassing Cuba and Rwanda.

Seychelles is expected to take necessary steps to ensure that in future, indicators in all relevant fields are taken up by foreign organizations when compiling their global reports.