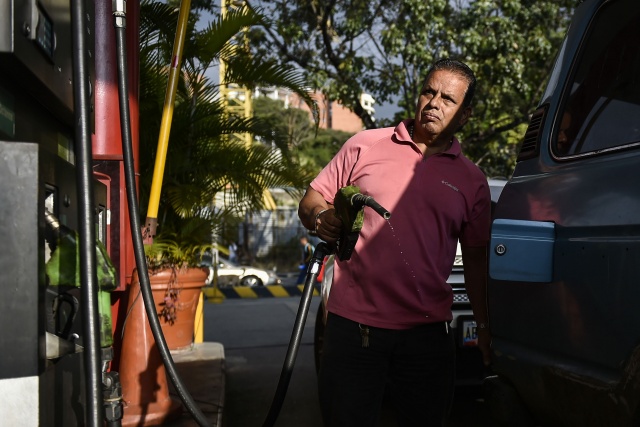 A man pumps fuel at a gas station in Caracas, on January 29, 2019. The United States announced sanctions against Venezuela's state oil company Monday in a coordinated effort with the main opposition leader to cripple embattled President Nicolas Maduro's power base. (Luis ROBAYO / AFP)

(AFP) - United States sanctions aimed at pressuring Nicolas Maduro to capitulate in his power struggle with self-proclaimed acting-president Juan Guaido have Venezuelans fearing they may be left facing fuel shortages.

Whether they support the US sanctions or not, Venezuelans interviewed by AFP agreed on one thing: with a devastated economy, hyperinflation the International Monetary Fund predicts will reach 10 million percent in 2019 and shortages of food and medicines, this will only make things worse.

The US imposed sanctions on Venezuela's state oil company PDVSA on Monday in an attempt to cut off a vital source of funds propping up Maduro's government.

Proceeds from the purchase of Venezuelan oil will now be withheld from Maduro, a heavy blow given that more than 40 percent of the South American country's crude is sold to the US.

And while Irene Mendez fears it will become impossible to buy petrol in the coming weeks, she says it will be worth it.

"It will be really strange," she said. "We're used to petrol being really cheap and, on top of that, it's available."

Fuel in Venezuela is practically free: one dollar can buy more than 300 million liters of fuel but only a kilogram (2.2 pounds) of onions.

The 40-year-old accountant, who supports Guaido, says any "sacrifice is worth it" to force through political change.

He wants the government to engage in dialogue with the opposition and is disappointed in Guaido's decision to proclaim himself acting president.

He said that in political struggles, "those who are disadvantaged are us: the people."

More than 40 people were killed and 850 detained in anti-Maduro protests last week, according to the United Nations.

Most of the deaths happened on the day that Guaido pronounced himself acting president, a move quickly backed by the US and a dozen Latin American countries.

Guaido, president of the National Assembly legislature, accuses Maduro of being a "usurper" over his reelection last May.

The poll was boycotted by the opposition in protest at the detention, barring and exile of many of their most prominent leaders.

As well as a shortage of basic necessities, Venezuela has suffered failing public services, with 90 percent of its public transport system paralyzed due to the scarcity and high cost of spare parts.

Lovera is afraid that fuel shortages will add to the problem and "worsen" public transport.

For Jorge Moncada, another truck driver, the sanctions are an economic "checkmate."

He says there are "already places where you can spend up to 24 hours" waiting in line for fuel.

Since 2012, fuel supply failures have been chronic in the cities of San Cristobal and Maracaibo, near the border with Colombia, with unending queues of vehicles at petrol stations.

Despite the constant tensions between Washington and Caracas since the socialist regime of Hugo Chaves came to power 20 years ago, the US has remained Venezuela's biggest single oil client.

But with the US demanding Maduro relinquish power in order to lift the sanctions, "if there isn't a political change soon, we'll have serious fuel problems," said analyst Asdrubal Oliveros from the Ecoanalitica consultancy.

US purchases actually account for 80 percent of Venezuela's liquidity, according to Ecoanalitica, since exports to allies Russia and China are principally used to pay off debts.