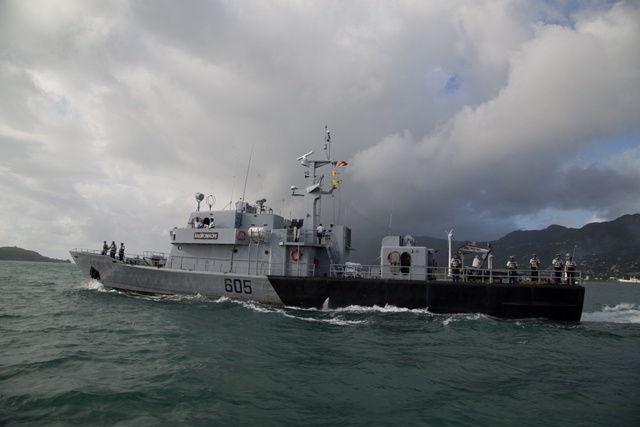 (Seychelles News Agency) - The Seychelles Coast Guard will be short of one of the archipelago’s main patrol vessels engaged in the protection of the island nations’ exclusive economic zone of 1.3 million square kilometres, as ‘Andromache’ undergoes a major refit in Colombo, Sri Lanka.

According to a press statement issued by the Seychelles People’s Defence Forces (SPDF) Andromache and its 21 men crew which left Seychelles yesterday, will be spending one month at the Colombo Dock Yard and is expected back early September.

“In Colombo, major engineering works have been planned on the ship’s hull as well as machinery and other auxiliary equipment. The refit is part of the ship’s normal maintenance cycle,” reads the statement.

Built in Italy in 1982, Andromache which is a 42 metres patrol ship has over the last few years been actively involved in the fight against maritime piracy in the region.

Seychelles has been at the forefront of the fight against Somali piracy in the Indian Ocean, having undertaken three naval rescue operations at sea where hostages were released alive.

The island country prosecuted the largest number of Somali pirates between 2009-2013. To date 124 pirates have been convicted. Most of them have been repatriated to Somalia to serve their sentences. 23 remain in Seychelles’ Montagne Posée prison awaiting trial.

Andromache is amongst three of the Seychelles fleet of patrol vessels measuring more than 40 metres long, the other two are Topaz and ‘Etoile’ which was recently gifted to Seychelles by China.

Another Seychelles Vessel, the smallest of island nations’ fleet of tankers, has also made the trip to Sri Lanka alongside Andromache.