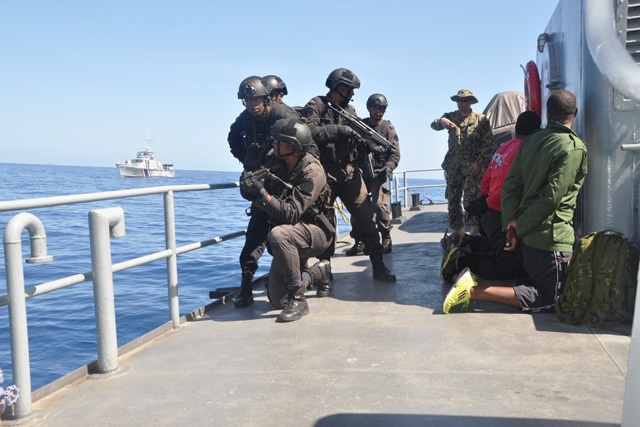 (Seychelles News Agency) - Seychellois military officers are joining with their counterparts from the United States, Europe, East Africa and the western Indian Ocean for the eighth edition of the Cutlass Express exercise.

Cutlass Express – a United States-led annual multinational maritime exercise – is currently being held in the vicinity of Djibouti and Mozambique. Part of the exercise will also take place in the Seychelles – a group of 115 islands in the western Indian Ocean.

According to an article on the defence Web, the exercise started on January 28. Conducted by U.S. Naval Forces Africa, the exercise is designed to assess and improve combined maritime law enforcement capacity, promote national and regional security in East Africa as well as information sharing, planning and operating.

“Today, we face serious challenges at sea such as illegal fishing, trafficking of weapons, narcotics and people and the ongoing threat of piracy,” said Rear Adm. Heidi Berg, director, intelligence and knowledge development directorate of AFRICOM, the U.S. military's Africa division. Berg added that “our efforts here will help make the region a safer place for maritime commerce and help increase prosperity throughout the region.”

Cutlass Express is one of three Africa-focused regional, “Express” series exercises sponsored by AFRICOM and facilitated by U.S. Naval Forces Europe-Africa. The exercise falls under Africa Partnership Station, the umbrella program for the Express series of exercises and other capacity-building initiatives throughout Africa.

“U.S. Africa Command sponsored exercises like Cutlass Express are part of a wider effort the United States undertakes with African partners to deter and defeat transnational threats and provide a security environment conducive to good governance and development,” explained Berg.

The participating nations will be testing their ability to combat illicit trafficking, piracy, illegal fishing, as well as conduct search and rescue operations.

Lieutenant Michel Payet of the Seychelles People's Defence Forces (SPDF) told SNA on Wednesday that the SPDF is taking part in the exercise with around 50 officers.

“The training is both theory and practical and will be held both on land and in the sea. We will also have two vessels and one military aircraft in the exercise which ends on February 4,” said Payet. He added that scenarios of searching for narcotics as well as a search and rescue will also feature in the exercise.

Participating in this year’s exercise are 15 other countries. These are Canada, Comoros, Djibouti, France, India, Kenya, Madagascar, Mauritius, Mozambique, Portugal, Somalia, Tanzania, the Netherlands and the United States.

“The United States of America recognises the importance of a stable and secure East Africa,” said J. Alexander Hamilton, Deputy Chief of Mission of the U.S. Embassy in Djibouti. “The success of these countries is largely dependent on a secure environment along the coast and the surrounding seas.”

In February last year, drug trafficking, illegal fishing and piracy were the focus of the seventh annual multinational maritime exercise which Seychelles hosted for one week.

“The training is a great learning opportunity for our officers. As this is held every year it provides us with continuous training for ourselves as well as for new recruits. Cutlass Express is held at such a high level with the participation of military forces more advanced than us. This provides us with great learning and training opportunities and we benefit greatly from their expertise,” concluded Payet of the Seychelles People Defence Forces.

General » Be a reporter: Write and send your article » Subscribe for news alert
Tags: Cutlass Express