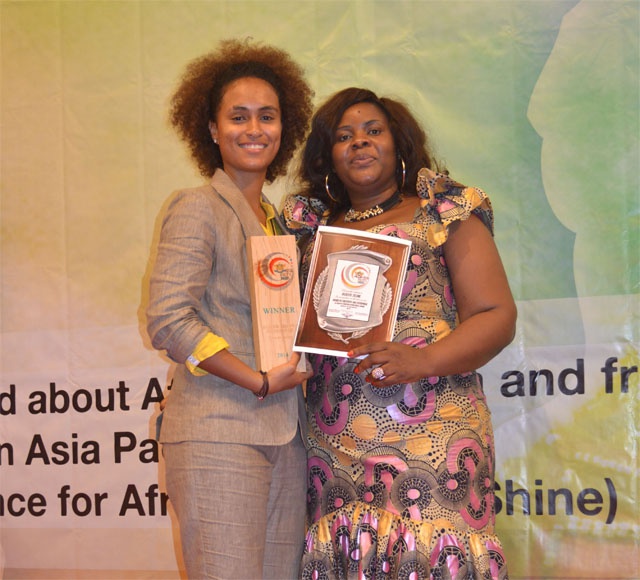 (Seychelles News Agency) - In 2006, a slightly-built young woman from the Seychelles, a tiny island nation in the Indian Ocean was sent to study fine arts in one of the most populous nations in the world: China. As if the thought of spending the next few years on her own in the bustling metropolis of Beijing wasn’t intimidating enough, Juliette Zelime was confronted with a seemingly insurmountable language barrier that made it very difficult to study, travel or shop without assistance.

Fast-forward eight years and the scenario today is quite different: a relaxed Juliette, now thirty years old, can be found sauntering through the streets of Beijing, greeting friends in Chinese and even running her own business in between classes. Her uniquely branded line of accessories such as bags, jewellery and t-shirts, called KAJU, is a combination of both Asian and Seychellois elements of design.

It is her determination to not only succeed but creatively thrive in any environment that has gained her recognition from the Appreciate Africa Network during their Asia-Pacific African Achievers Awards ceremony held in Beijing at the end of June. Juliette was one of 26 award recipients, taking home the ‘Creativity and Enterprise’ award.

The African Achievers Awards Asia-Pacific is a non-profit programme which strives to recognize the efforts of Africans around the Asia-Pacific region in various disciplines such as arts, culture, enterprise, sports, media and music.

In an email interview with SNA, Juliette has said she dedicated the award in her acceptance speech to her home country as the ceremony was held on Seychelles’ Independence Day, June 29.

“KAJU also sponsored the event with a gift pack and our quote for that day was ‘Wise Africa. Rise Africans’.”

“Africa is an old continent, the first place of civilization, thus Africans should seek to excel in life,” said Juliette.

“I remember since I was small I liked to draw, but I really knew that art was my passion when I was in secondary. I found myself in the art room all the time and wouldn’t be interested in other academic classes.”

Faced with deciding what she wanted to study after secondary school though, Juliette was torn between several options, including sports and the arts.

“Even if I loved art I didn’t know that I wanted to take it as a field of study,” she recalls. “I remember when the post-secondary results came out and I had been accepted to attend the College of the Arts.”

“Knowing it was my third choice I was disappointed, but the next thing I knew, I was enjoying the College of the Arts and I felt it was exactly where I belong.”

Juliette and her classmates regularly encountered problems such as a lack of art materials, but she credits these challenges as the reason why she became so creative.

“We didn’t just sit and complain. We went looking for other things that we could use to make our art works. We encouraged each other, the teachers were very supportive as well and I’m proud to say that our class was one of the best that ever graduated from the National College of the Arts.”

If Juliette’s class was the best to graduate, she was the most promising pupil, being awarded the best overall student at her graduation ceremony in 2003.

Juliette was then sent to China in 2006 to do a Bachelor’s degree in visual communications at the Central Academy of Fine Arts in Beijing.

The first few months were the hardest, according to Juliette, being unable to communicate, but she soon got to grips with the language with a compulsory one-year Chinese language course before getting down to her major.

Graduating in 2010, Juliette returned to Seychelles, where, now trained in visual communications, she noticed that many locally-made products were not branded effectively.

Everywhere she looked, she saw well-branded products imported from other countries, and this eventually led her to start her own business in 2012, creating a line of bags and accessories using what she had learned from her studies in China.

Along with the slogan ‘Living it the island way’, her KAJU products reflect the culture, tradition and natural aspects of Seychelles, married with some uniquely Asian motifs.

Juliette then decided to pursue a three-year Master’s degree in visual communications, returning to Beijing in September last year to resume her studies.

“Coming back in 2013 was less stressful as I already know the place, but the language is still a barrier, there is still so much to learn,” she laments. “One other thing that is still a big challenge is cold Beijing winter the time I least look forward to.”

Juliette who has adopted the artist name of ‘Jadez’ made friends with a bag-maker Wang Honglian, who helps her to design bags which he then sews. The finished KAJU products, mostly beautiful island-style canvas bags with a casual over-the-shoulder sling, are shipped to the Seychelles, where she now supplies the Seychellois-owned online clothing company Venture Bay.

That’s not the end of her plans for the KAJU line, however.

“It’s difficult to find place to rent and being able to keep up with the rent,” she said. “It’s especially not easy for small businesses, but we do plan on having our own shop in the coming future and see KAJU branch out to other islands and go international.”

Developing the arts in Seychelles

Apart from her entrepreneurial ambitions, Juliette intends to return to Seychelles when she has finished with her Master’s degree, working towards the development of her small island home, especially in the field of the arts, but acknowledges she still has a strong desire to travel the world in her quest to further develop her own artistic capabilities.

“I do plan to keep travelling as it’s of utmost importance in the continuous development of an artist’s career. Thoughts have come to mind of staying abroad to work, but I’ve decided that it’s not the best thing to do for now,” she said.

“Seychelles will always be home, I have my family there, people that raised me and helped shape me into the person I am today. Thus it’s important for me to take my responsibility and be there for them, especially my loving parents. I owe them that much.”

Juliette is adamant that young Seychellois should follow their passion and live their dreams.

“You want to be an astronaut? Even if Seychelles doesn’t have prospects in this field it doesn’t mean you have to put away your dreams,” she said.

“You are a citizen of the world, lucky enough to have been born a Seychellois. If you have to leave your home country to pursue your dreams, do so. Always keep Seychelles in mind and at heart.”

Thinking of family and recalling the tropical mountains of the Seychelles will provide “courage in desperate times”, she said, enough to keep one striving towards one’s dreams.

“Most importantly you’ve got to believe in yourself, have your own set of beliefs from personal experience and wisdom gathered – things which you know are right – and use that as a guide to every decision you take in life,” she advised.

Time to stand up for the arts

Seychelles may be small, says Juliette, but she sees no reason why this should hold the country back in terms of the arts.

“We need to start showing the right attitude towards it,” she said, explaining that more priority needed to be given towards the arts at a basic level in education, and that school-leavers who wished to join the creative field needed better prospects.

The need to develop a well-equipped art school with well-trained teachers, as well as more galleries, exhibitions and competitions in Seychelles is critical, said Juliette, even though she is aware it would take a large investment in terms of time and money.

“It’s time to stand up for the arts, we are taking too long,” she said. “Tourism is one of the pillars of our economy and art can support it and can back it up, 100%.”

“Can you imagine Seychelles without artists?” she asked. “Don’t limit oneself thinking visual artists are people who only paint and draw. Architects are artists, graphic designers are artists, and florists are artists.”

“We all need each other, so we should make it easier so that we all can work together to make our country move forward.”