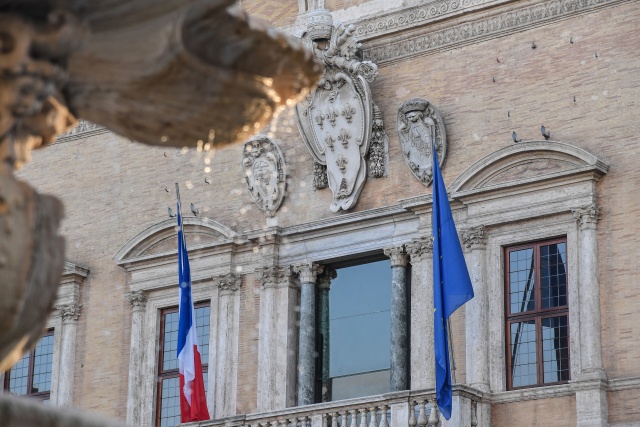 The Palazzo Farnese, headquarters of the French Embassy in Rome, is pictured on February 7, 2019. France on February 7 recalled its ambassador to Italy after Italy’s Labor and Industry Minister and deputy PM Luigi Di Maio met with French yellow vest protesters in France, and a series of critical Italian comments toward the French President's government. (Tiziana FABI / AFP)

(AFP) - France took the exceptional step of recalling its envoy to Rome on Thursday to protest a series of attacks from the Italian government which it described as "unprecedented" since World War II.

"For several months France has been the subject of repeated accusations, unfounded attacks and outlandish claims," a ministry statement said. "This is unprecedented since the end of the war."

In 1940, Italy under leader Benito Mussolini invaded France, occupying part of the southeast, but they have been allies since and are founding members of the European Union.

It is the first time since the war that France has recalled its ambassador.

Di Maio and Salvini, who formed a populist coalition government last year, have repeatedly criticised Macron, who has in turn targeted their eurosceptic movements ahead of high-stake European Parliament elections in May.

Di Maio said the aim of the meeting was to prepare a common front for the European Parliament elections, boasting on Twitter that "the wind of change has crossed the Alps."

But Paris denounced the matter as "an additional and unacceptable provocation".

Speaking to AFP, a French official described the recall as a diplomatic message warning Italy to "stop playing with Franco-Italian friendship".

"The measure is exceptional, but it's not designed to worsen or escalate" the situation.

The escalating war of words began when the Five Star Movement and Salvini's far-right League parties won the elections last summer and formed a coalition government.

When the populist government then began preventing rescue boats with migrants on board from docking at Italian ports, Macron blasted its "cynicism and irresponsibility", comparing the rise of far-right nationalism to leprosy.

It has since spiralled into a string of tit-for-tat exchanges, leading to this week's latest spat.

"We don't want to row with anyone," Salvini said on Thursday, calling for solutions to problematic issues such as French border controls on the Italian frontier and Rome's demands for the extradition of far-left Italian activists living in France.

Both Salvini and Di Maio also issued statements saying they were available to talk to Macron and the French government.

And Di Maio also denounced the French government for protecting the elite and the privileged, saying "a new Europe is being born of the 'yellow vests', of movements, of direct democracy."

Salvini also poured fuel on the fire last month with a Facebook video in which he said: "I hope the French will be able to free themselves of a terrible president."

"The opportunity will come on May 26 when finally the French people will be able to take back control of their future, destiny, (and) pride, which are poorly represented by a character like Macron", he said, referring to the date of the European Parliament elections.

Sebastien Maillard, who heads the Jacques Delors thinktank in Paris, suggested there was little reason for the Italians to call off the fight.

"I don't quite see what di Maio and Salvini could gain by calling off the battle which serves their domestic political goals," he said.