After increase in gender-based violence, Seychelles pushes for action plan 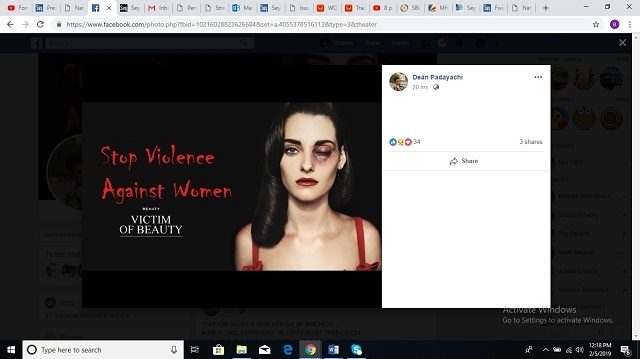 (Seychelles News Agency) - The Seychelles is pushing ahead and finalizing a national plan of action for gender-based violence, or GBV. This move comes now that the Ministry of Family Affairs is increasing awareness on the issue following a rise in the number of GBV cases. Four murders were reported for January 2019 and all were results of domestic disputes.

Recently there was the launching of the Orange Seychelles Campaign at the Montagne Posee prison, where the 25th of each month is being used to create awareness on violence.

“Work being done is on a national gender policy, basically work involves reviewing and updating the document,” explained Benjamin Vel.

Vel, who is facilitating the review of the document on behalf of the ministry, added that “with regards to gender-based violence, the objective of the plan is to prevent all forms of gender-based violence in the public and private sphere and provide integrated services to survivors and perpetrators.”

The plan encompasses different actions to be taken to address and eliminate gender-based violence in the island nation.

Whilst the ministry will be the main coordinator of the plan, it is expected that all sectors will contribute to its implementation.

“The increasing cases of domestic violence leads to a domino effect which means it affects not only the victim but also the people around them as well as the community,” Family Affairs Minister Mitcy Larue said recently during a press conference on the issue.

The ministry is seeking ways to raise awareness among the general public in order for them to be able to speak up when they are in such situation.

“Seychellois people have also lost some of our values like respect, tolerance and love and we need to find our way back so as to become an exemplary model for our next generation,” Larue said.

Marie-Josée Bonne, the principal secretary for family affairs, explained that the ministry is also increasing its activities and programmes.

“We will be conducting programmes in school for boys and it will be called boys engagement programme. The goal of the programme will be educating boys at a young age about domestic abuse and teaching them on how to show their emotions and not use violence as a solution,” said the principal secretary.

Dean Padayachi is a concerned citizen with the rising cases of violence and the lack of support and services for those in need.

“Currently, I am housing two women and their children, all have gone through domestic violence and cannot go back to their house where the perpetrators also reside,” said Padayachi.

“I feel that a more comprehensive approach is needed in the country to tackle this issue once and for all,” said Padayachi who uses his social media page to raise awareness on violence against women.

In November last year, an EU – funded facility was opened to shelter women facing gender-based violence, but to date, only one woman has been accepted at the home.

The Citizen Engagement Platform of Seychelles (CEPS) - an umbrella group of civil societies in the island nation – which manages the shelter told SNA that proper referral for admission to the shelter has not been followed and CEPS and its partners are working on ways to rectify the issue.

Padayachi feels that the shelter should also review its no children policy as “no woman is prepared to leave their children behind and enter a home alone.”

The latest statistics published in December 2016 shows at least 58 percent of women in Seychelles – an archipelago of 115 islands in the western Indian Ocean - experience some sort of violence from an intimate partner in their lifetime.

General » Be a reporter: Write and send your article » Subscribe for news alert
Tags: Citizen Engagement Platform of Seychelles