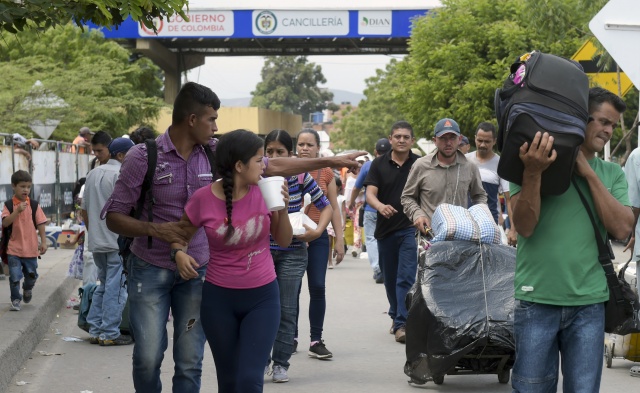 People cross the Simon Bolivar International Bridge at Cucuta, Colombia, on the border with Tachira, Venezuela, on February 9, 2019. Venezuelans cross to Colombia to buy groceries due to the shortages in their country. Venezuelan President Nicolas Maduro vowed on Friday not to let in "fake" aid from the United States requested by opposition leader Juan Guaido, which is being stockpiled at the border with Colombia. (Raul ARBOLEDA / AFP)

(AFP) - Desperately needed aid being stockpiled at Venezuela's door is at the heart of a political duel between the two men fighting to lead the oil-rich nation: Juan Guaido and Nicolas Maduro.

Guaido, recognized as Venezuela's interim president by around 50 countries, has pressed the all-critical military to allow the mostly American humanitarian aid to reach the most vulnerable population, or around 300,000 people.

Maduro insists the shortages plaguing the country are caused by Washington's punitive sections, and he has vowed to stop the "spectacle of fake humanitarian aid."

The aid "is at the heart of the struggle between two pillars of power," political scientist Luis Salamanca told AFP.

"This struggle is playing out as concerns the future of the armed forces. Guaido is trying to get the military on his side, while Maduro tries to keep it behind him."

Using a tanker truck, two container trucks and barriers, the army has been blocking the Tienditas border bridge since Thursday.

Several hundred meters (yards) from there on the Colombia side are the hangars where the emergency aid is being stockpiled.

For John Magdaleno of the Polity consultancy, the confrontation between the two men is a "major event" that "is inevitably leading toward an escalation" between the government and the opposition, as well as between Maduro and the countries supporting his adversary.

"In the end, it's in the hand of the United States. They are the ones who can use force," Magdaleno said.

President Donald Trump's administration, which has insisted that "all options are on the table" -- has frozen the accounts of Venezuelan leaders and unveiled fresh sanctions to bar Maduro from accessing revenues from oil his country sells in the US.

Before possibly resorting to force, Washington is exploring "all other options" first, Magdeleno said, adding that "this chapter on humanitarian aid foreshadows a far more significant escalation that could trigger a military intervention."

However, Assistant Secretary of State for Western Hemisphere Affairs Kimberly Breier has insisted that the US has no intention of entering Venezuelan territory by force to distribute food and medicine.

The United Nations said it's ready to send emergency aid to Venezuela, but only if Caracas agrees.

Venezuela has faced a major political and economic crisis in recent years. Expropriations have hurt industry and oil production, which finances 96 percent of the national budget, thus reducing imports of basic goods.

More than 80 percent of medicine and medical equipment are missing in a country that has the world's largest proven oil reserves, according to the pharmaceutical federation. There are constant cuts of basic services such as water and electricity.

Maduro accuses the United States of setting up an "international coalition... to intervene militarily in Venezuela under the pretext of a non-existing humanitarian crisis."

For the National Assembly's former president and opposition lawmaker Henry Ramos Allup, the government's refusal to allow humanitarian aid to enter the country "reveals once more to the world the regime's human rights violations."

The anti-Maduro camp has also denounced the regime's decision -- while Venezuela grapples with such a dire situation -- to send 100 tonnes of humanitarian aid to Cuba to assist the communist island in the wake of a recent hurricane.

The government faces a "strategic dilemma" because "regardless of its decision, it loses," Magdaleno said.

If Maduro relents and allows the aid in, this means he finally acknowledges that there is, in fact a humanitarian crisis.

"Maduro is going to put his foot down. It doesn't matter much anymore to him. He is playing a game that seems to be entering its last phase," which threatens his hold on power, said Salamanca.