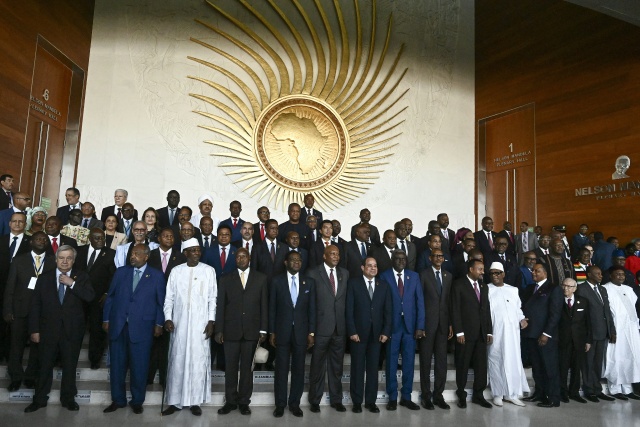 UN Secretary General Antonio Guterres (L), Egyptian President Abdel Fattah al-Sisi (C) and other Heads of States and officials stand for a family photo during the 2nd African Union (AU) summit in Addis Ababa on February 10, 2019. While multiple crises on the continent will be on the agenda of heads of state from the 55 member nations, the two-day summit will also focus on institutional reforms, and the establishment of a continent-wide free trade zone. (SIMON MAINA / AFP)

In a letter to the African Union summit in Addis Ababa, Martin Fayulu restated his allegation that the vote result had been rigged, and suggested "holding the elections again within six months".

Felix Tshisekedi was declared winner of the December 30 ballot with 38.5 percent of the vote, against Fayulu's 34.8 percent.

Fayulu, whose letter was made public on Monday, said the DRC's Independent National Election Commission (CENI) had "quite simply fabricated the results it published".

He pointed to reports from independent election monitors and observers from his own coalition, Lamuka, as well as to vote tallies by the CENI itself that have been leaked to the press.

"(All) attest that I was elected president of the Democratic Republic of Congo with more than 60 percent of the vote," he charged.

Fayulu suggested setting up an AU special committee to verify the results.

The two-day AU summit, which was winding up on Monday, was attended by Tshisekedi, who was elected the organisation's second vice president for 2019.

Fayulu's bitterness over the election outcome has mingled with relief outside the country that the vote was calm by DRC standards and led to the country's first-ever peaceful transition of power.

Both Fayulu and Tshisekedi are from the ranks of the opposition.

The election should have taken place at the end of 2016 but Kabila stayed in office for an additional two years, invoking a caretaker clause in the constitution.