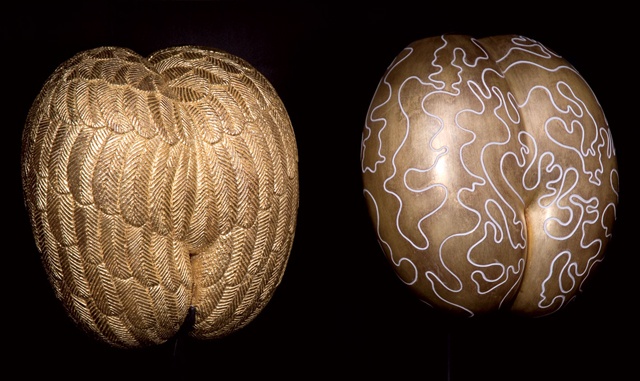 (Seychelles News Agency) - Marie-Laure Le Guay de Villepin alias Viébel was born in1962. She lived in the USA and India. She studied for many years the complex art of gilding in a Parisian workshop. Since 2006, she focused on the concept of the “Seed of life”, mastering her art of sculpting and gilding, and developing sculptures in bronze and Murano glass. She is married to former French Prime Minister Dominique de Villepin, however they have separated since 2011.

As the first Western navigators in the sixteenth century set sail across the Indian Ocean, they discovered enormous two-headed seeds floating in the sea. These nuts had already been gathered from Indian, Sri Lankan, Indonesian and South African shores, but mostly in the Maldives. Was it, as legend has it, fruit borne from giant trees growing at the bottom of ocean? Strangely, these seeds formed of two domed parts bear a cheeky ressemblance to the pubic triangle as well as the female buttox and male crotch: it is the renowned “coco de mer”, otherwise known vulgarly as “coco fesse” (coco buttox) or the “coco of Salomon” as well as the “coco of the Maldives”.

In 1572, the national Portuguese poet Camoes dedicated a verse of his famous “Lusiades” to the “coco de mer”, while his compatriot Magellan recorded having seen it in his diary.

The origin of the largest seed in the world still remains a secret. It was during the conquest of the archipelago of the Seychelles in 1768 that a French expedition finally identified its exclusive homeland. There the Island of Praslin was home to the largest reserve of these “coco de mer” palm trees, now the famous “Forest of May” or '"Vallée de Mai," in French. A remnant of a prehistoric era and cradle for humanity, this botanical haven just 20 hectares long was designated a World Heritage site by UNESCO in 1983. Some trees measuring up to 30 metres in height could very well be up to 200 or 300 years old.

Rare, and full of mystery, the “coco de mer” became a collector’s item, filling up “curiosity cabinets” all around Europe, as early as the sixteenth century.It then travelled as far as Asia, swept along by currents of the sea. Associated with the Divine, it was accredited a sacred role: in Hinduism, it was transformed into a precious box or “poor box” by the “begging monks” as in Sufism (a mystic offshoot of Islam) going by the name of “keshkul.”

Through its symbolism of fecundity and fertility, the coco, transformed into a container, conveyed a magical power to everything it contained. The skin of this nut, some used to say, possessed healing powers against several illnesses and infections, but it is best known for its extraordinary aphrodisiac powers...

A few years ago, it was the French sculptor Marie Laure Viébel’s turn to fall under the charm of its sensual shapes that would go on to inspire her. A marvel of nature, this seed is dual in many ways. Formed from two lobes (like the brain or the lungs), it merges humanity with botany, feminine with masculine, reminiscent of the Chinese Yin and Yang, night opposed with day, cold with heat, death with life.

She set herself the task of brightening up these seeds made from dull mat wood by turning them golden. First she moulds them, reshapes them and softens the edges. Then she moulds new materials, both rough and smooth and carves snake scales, bird feathers, clouds and cat fur. She invents arabesques, whirlpools, labyrinths, tells stories, reinventing and thus rechristening each individual seed.

Each seed then takes on an artistic dimension becoming its own unique creation.

In 1881, the British general Charles Gordon urged theBritish to preserve the forest which was then in danger of extinction: he even went so far as to compare this monumental forest with the “Garden of Eden”, Adam and Eve’s paradise. The palm tree became “the tree of knowledge”, and the “forbidden fruit”, no longer the apple, became the “coco de mer.” This story inspired Viebel to create “the snake seed”, the seed of temptation. A mouth on a seed of life?

A quick acknowledgment of the French writer and encyclopedist Denis Diderot who wrote “The Indiscreet Jewels” in 1748. In this tale, an African sultan appeals to a silver ring with very unusual properties: when he rubs it, the female sex begins to speak. The mouth speaks but the mouth listens...

In Viébel’s bronze version, the lips are half open, becoming a message box, inspired by the two legendary Italian mouthshaped boxes: The “mouth of truth” in Rome, (each time a hand is put in the mouth, it has the power to tell whether a woman is lying or not.) “The mouth of denunciation” at the Doge’s Palace in Venice (which welcomes anonymous denunciations that benefit the State.) These two mouths are the mouths of men. Viebel’s “seed mouth” is feminine, but she has made it a “box of forgiveness”. A symbol in itself...

Gold, a perfect metal, “the flesh of Gods”, “tears of the sun”, it is also a symbol for immortality. By covering it in gold leaf, Viébel lights up the “coco de mer”, transporting it into a sacred realm, in the image of Orthodox icons, Egyptian sarcophaguses and Buddhas.

The “coco de mer” becomes the “seed of life”. This light pushes and breaks the boundaries of art and nature, making the seed universal. Viébel then moves on to other materials: bronze, whose various patinas evoke the skin and smoothness of creole women.

She extends her artistic adventure to glass in the secrecy of the ancient workshops of Murano (Venice). There, a master glassblower, Gianni Seguso, helps her to create pieces removed from furnaces as unique models. The magic and mystery of light plays with transparency, coloured models and carvings.

Viébel completely transforms these bronze seeds giving them new dimensions: some are more than two metres tall and can weigh up to 800 kg. Then they may return to nature in flower gardens, rocked by the breeze, caressed by the rain, in other continents and in other latitudes.

The seed from which everything originates repeats itself and thus perpetuates the cycle of life.

Marie Laure Viébel exhibited her work in Aix en Provence in 2010, in Strasbourg and Venice in 2011 to mark the Biennial. The next exhibitions of her work will be in China and South Africa. More information can be viewed on http://www.mlviebel.com/