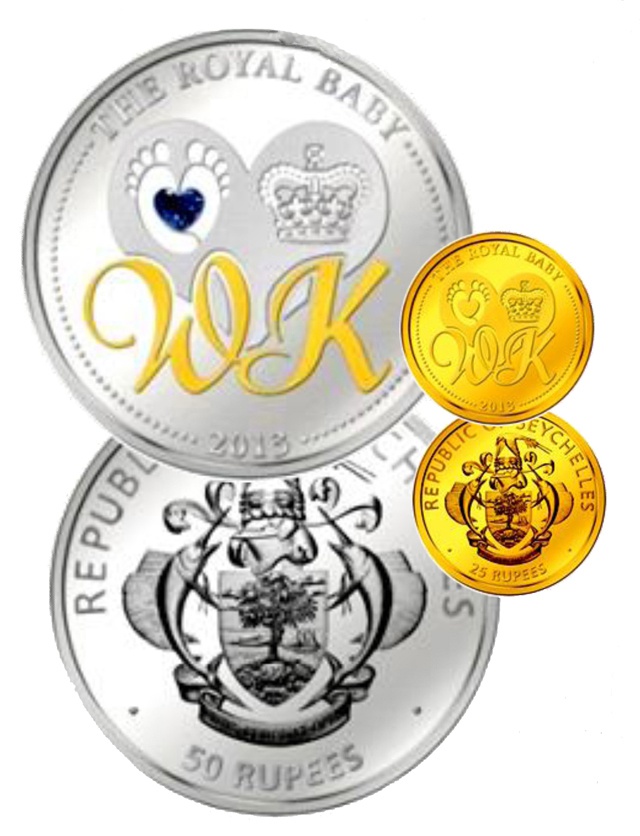 In an interview with SNA, the Currency and Numismatics Officer at CBS, Jude Adolphe, said the coins were released internationally to commemorate the birth of Prince George of Cambridge last year and is now being made available in Seychelles in commemoration of the Prince’s first birthday.

Prince George was born on July 22, 2013 to parents Prince William, Duke of Cambridge, and Catherine, Duchess of Cambridge, known as ‘Kate’ in less formal references.

The coins which can be purchased individually or as a set have been produced by UK based company Pobjoy Mint Ltd.

“Both coins have the same designs of a heart shaped foot print of the royal baby and a crown fitted inside a bigger heart shape, however the bigger sterling silver coin has an added special feature as the heart shaped footprint is decorated with a blue heart-shaped Swarovski Crystal,” says Adolphe.

Both coins also feature the initials of William and Kate (W K).

According to the Seychelles Central Bank 999 silver and 5, 000 gold ‘Royal Baby Commemorative coins’ have been produced including those that are now available locally and those being sold internationally by a German based company MDM.

“This time the number of coins produced are limited, meaning it is more special and rare compared to other commemorative coins we have produced in the past,” noted Adolphe.

“The box set for ele is no longer available internationally and only a portion kept for the local market is now available to cater for the demand which has been assessed by the Central Bank based on the clientele for such coins issued by the bank.”

The Central Bank of Seychelles has released several commemorative coins over the years, the latest before the Royal Baby Coin was released in May in remembrance of the canonization of Catholic pope of the 20th Century, John Paul II, which is not currently available in Seychelles.

The Royal Baby Commemorative coin on the other hand is not the first such coins relating to the UK’s Royal family that the Seychelles Central Bank has released.

The ‘Queen Elizabeth II, Diamond Jubilee coin’ was released in 2012 and the ‘Royal Wedding of Prince William and Catherine Middleton Coin’ in 2011.

Prince William and his wife HRH the Duchess of Cambridge, Catherine, spent their honeymoon at the exclusive private island resort on Seychelles’ North Island,  recently revealed as the most expensive hotel in the world at an average cost of $6,695 per night.