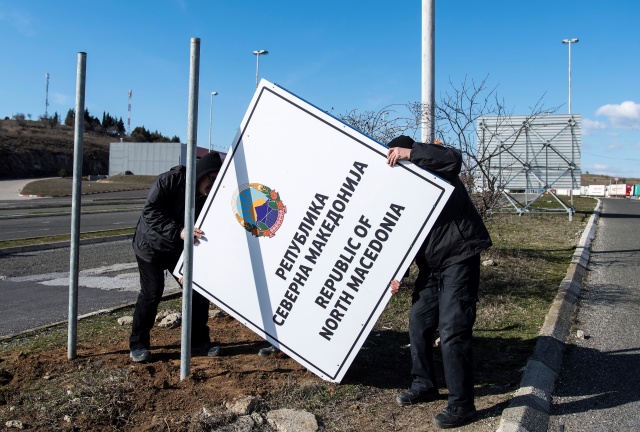 People are at work to set up a sign reading 'Republic of North Macedonia' at the Macedonia-Greece border near Gevgelija on February 13, 2019. The Macedonian government said on February 13 it had officially informed the United Nations of the country's new name following its historic agreement with neighbouring Greece. Skopje and Athens buried a 27-year dispute in agreeing in June last year to rename Macedonia as North Macedonia. The new name came into force on on February 12 after constitutional changes were published in the Official Gazette and Skopje's foreign ministry said both countries had informed the UN by letter that the change is now in force. (Robert ATANASOVSKI / AFP)

(AFP) - UN Secretary-General Antonio Guterres has received official notification from the Macedonian government to change the name of the Balkan country to the Republic of North Macedonia.

Guterres on Wednesday welcomed the development ending a decades-old dispute between Greece and Macedonia over the Balkan country's name.

At the United Nations, the country had been known as the Former Yugoslav Republic of  Macedonia (FYROM) because Greece objected to the use of Macedonia, the name used for its own northern region.

In a statement, Guterres praised Macedonian and Greek leaders for their "forward-looking vision" and urged regional organizations and international partners to support the historical step.

The UN chief said the settlement showed that "even seemingly intractable issues can be resolved through dialogue and political will."

The 27-year-old dispute was finally settled in June during UN-brokered talks.

The new name came into force Tuesday after constitutional changes were published in the official gazette and Skopje's foreign ministry said both countries had informed the UN by letter that the change is now in force.

A notice will be sent to the General Assembly and the Security Council to inform them of the change, a UN official said.

Since 1991, Athens had objected to its neighbor being called Macedonia because Greece has a historic northern province of the same name. Greece has blocked Macedonia's NATO and EU integration until it changes the name.

General » Be a reporter: Write and send your article » Subscribe for news alert
Tags: Macedonia, UN