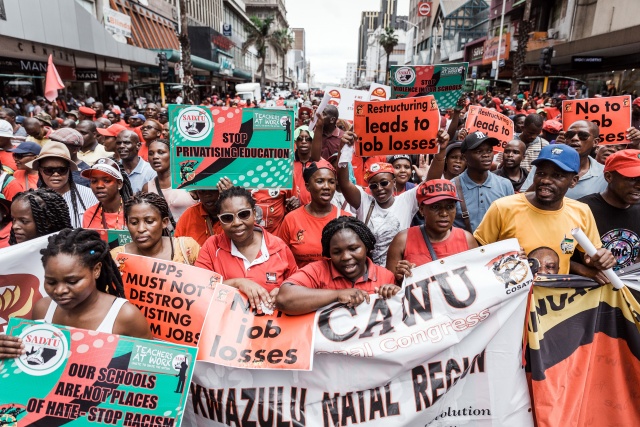 Members of the Congress of South African Trade Unions (COSATU) hold placards and shout slogans during a demonstration in Durban, South Africa, on February 13, 2019. Thousands of South African workers staged nationwide demonstrations to protest high unemployment and government policies that they say have failed to create jobs and are deepening poverty. (Rajesh JANTILAL / AFP)

(AFP) - Thousands of South African workers staged nationwide demonstrations on Wednesday to protest against high unemployment and government policies they say have failed to create jobs and are deepening poverty.

Workers dressed in red t-shirts, showing their loyalty to the trade union movement, gathered in the eastern port city of Durban, Johannesburg and other locations for open-air rallies three months ahead of the country's general election.

Companies in South Africa, notably in the mining sector, have shed tens of thousands of jobs in recent years in what unions have termed a "jobs bloodbath" as the economy of Africa's most industrialised nation struggles for growth.

Zingiswa Losi, president of the Congress of South African Trade Unions (COSATU), led the march in Durban, which was attended by about 6,000 people.

"Today's march is a national strike and we are marching to (say to the) government and the private sector, we cannot afford to lose jobs in this country," Losi told reporters.

About 2,000 people attended the Johannesburg rally.

Singing anti-apartheid songs such as "Senzeni na" ("What have we done?"), workers marched through the city centre dancing and "toyi-toying", a protest move synonymous with the struggle against apartheid.

Carrying banners that read "we demand decent jobs", "no to job losses" and "no to outsourcing and privatisation", marchers were undeterred by drizzling rain.

"Today black children are educated but there is no work," union member and domestic worker Gloria Sithole, 58, told AFP.

Marcher Ben Venter, deputy general secretary of the South African Society of Bank Officials, told AFP that President Cyril Ramaphosa needed to act on initiatives that would set employment on "an upward trend".

Official statistics released on Tuesday showed that the unemployment rate dropped marginally to 27.1 percent in the last quarter of 2018 from 27.5 percent in the previous quarter.

The drop was largely due to casual workers being hired over Christmas holiday period.

South Africa's economy grew less than one percent last year and is currently subjected to its worst electricity cuts in years.

Also among the union's demands was an end to state corruption and mismanagement.

The continent's largest energy utility Eskom, plagued by debt and mismanagement, plunged the country into darkness this week with periodic black-outs imposed as demand outstripped supply.

The ailing state-owned company is grappling with 419 billion rand ($30 billion) of debt.

Ramaphosa announced last week that the utility would be divided into three divisions, but unions have rejected the move, saying it would lead to further job cuts.

COSATU, which represents about 1.9 million members, called for a halt to any plans of privatising Eskom.

It has been a key ally of the ruling ANC party, which is seeking to revive its flagging popularity ahead of elections on May 8, when Ramaphosa is expected to retain power.

The trade union's leadership continued to throw its weight behind the ANC.

"We are in no way abandoning our ally," COSATU official Amos Monyela told AFP.

"We will mobilise our members to vote for the African National Congress but we will always challenge policy uncertainty that affects workers."