US officials to meet Xi as trade talks near end 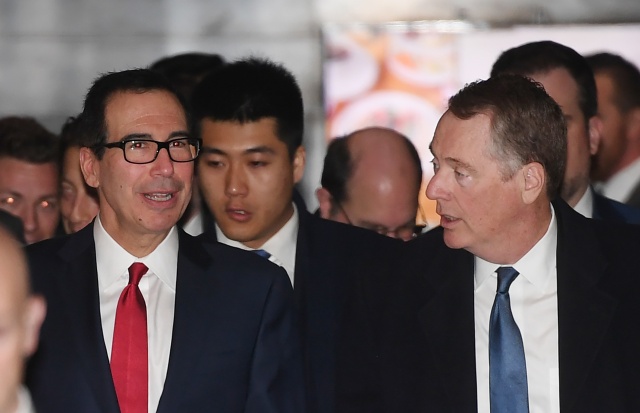 US Treasury Secretary Steven Mnuchin (L) and US Trade Representative Robert Lighthizer chat as they leave a hotel on the way to trade talks in Beijing on February 15, 2019. (GREG BAKER / AFP)

(AFP) - Top US economic officials were to meet on Friday with Chinese President Xi Jinping as the sides aim to wrap up trade talks in Beijing with enough goodwill to extend a truce in their tariff war.

The world's two biggest economies are seeking an accord to bridge their deep trade differences, after President Donald Trump set a March 1 deadline beyond which he would rescind a freeze on tariff hikes.

But Trump has since suggested he may extend that ultimatum, with Bloomberg News reporting he could push it back an additional 60 days.

"They're covering all the ground. They're hard at it," Kudlow said of the delegation led by US Trade Representative Robert Lighthizer and Treasury Secretary Steven Mnuchin.

Kudlow added that "the vibe is good," though there'd been "no decision" yet on extending the tariff truce.

But multiple reports said there had been little progress on thorny issues such as US demands that China crack down on forced technology transfers and reduce subsidies that favour domestic companies.

The Wall Street Journal said China had offered to boost imports of US goods with promises of major purchases of semiconductors and other items, but that officials "remained deadlocked on a number of issues".

Bloomberg News reported that the two sides had "failed to narrow the gap around structural reforms to China's economy that the US has requested".

The US officials left their hotel for Friday's talks without making substantive comment.

The United States accuses China of a slew of unfair trading practices, including systemic theft of US intellectual property, and wants deep reforms to the system.

Beijing and Washington have already imposed duties on more than $360 billion in two-way trade, weighing on their manufacturing sectors and shaking global financial markets.

Trump had said this week he was open to extending the deadline to give time for more negotiations and he says he will meet with Xi to finalise any deal.

In December he postponed plans to sharply hike tariffs on $200 billion of Chinese imports to allow more time for negotiation.

Expectations for a trade deal have grown as China faces pressure from slowing economic growth, and as swooning global markets pose a challenge to Trump and his economic advisors.

Data released Thursday in China showed its trade surplus with the US -- a major source of anger within the Trump administration -- narrowed in January to $27.3 billion, even as its American imports plunged 41 percent for the month from a year earlier.

The two sides said major progress was made in talks last month in Washington, but a wide gulf remains.

Beijing has offered to boost its purchases of US goods but is widely expected to resist calls for major change to its policies.

General » Be a reporter: Write and send your article » Subscribe for news alert
Tags: China, US, economy, trade, diplomacy