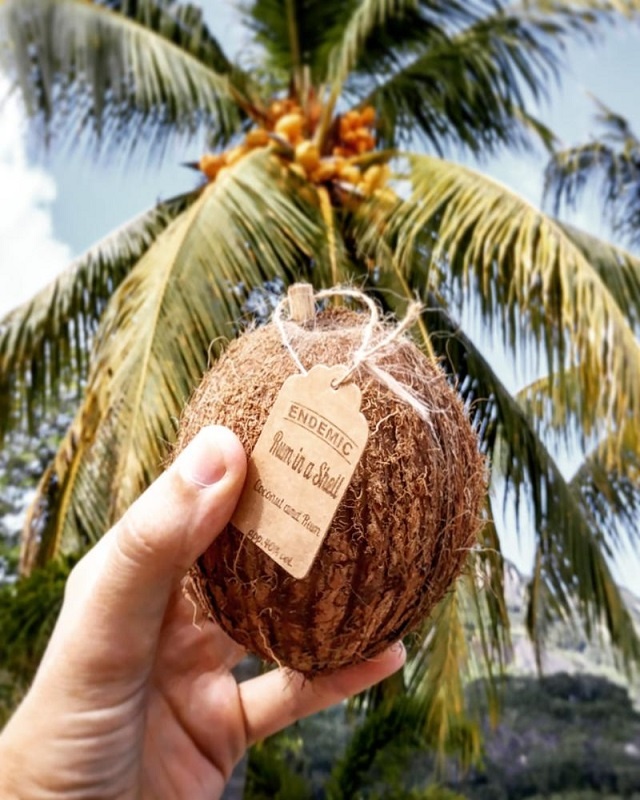 Rum in a Shell is the most recent creation of Spirit of Seychelles - Craft Distillery. (Salifa Karapetyan, Seychelles News Agency)

(Seychelles News Agency) - Crack a coconut open and pour out some of the rum inside. Not coconut water -- rum. Crazy, right? The founder of a local spirit brand has made every desert islander's dream possible through the production of ‘Rum in a Shell'.

The founder of the Spirit of Seychelles - Craft Distillery, Zack Liapoun, has found an alternative way to package and deliver rum products to his esteemed customers -- in a coconut.

“The main idea behind ‘Rum in a Shell’ is to be unique, go natural and stand out,” said Liapoun.

He explained that the flesh of the coconut remains intact inside the shell, into which he pours his distilled, 40 percent alcohol rum. It takes about a week for the rum to infuse with the coconut.

The products are available at some selective outlets such as STC, Kumar and Kumar, the Duty-Free shop at the airport and souvenir shops of tourism establishment, at the cost of up to $6.

“The ‘Rum in a Shell’ makes for a good present as it is something that you are going to buy and take to a friend and drink it in two or three days. It’s great to bring to a friend abroad as well,” said Liapoun.

‘Rum in a Shell’ is the most recent creation of Spirit of Seychelles - Craft Distillery, a business that started in 2016 at a small bar that Liapoun was operating. At the time he was distilling and making the rum available in only three flavours -- thyme, lime and passion fruit.

When he began operating the distillery at the bar, customers proposed the flavours they would like to try. If something did not satisfy his clients, Liapoun would simply stop production of that particular line and start experimenting with something else.

“Someone had this crazy idea to have this thing called 'Pet Latet' (blow up the head) which would be something very spicy, strong with lots of fruits. I made it happen and down the line, the spiced rum was inspired by that,” said Liapoun.

Making small batches of handcrafted carefully selected infused rum with real fruits, spices and herbs ensure that his products are of high quality and it keeps the budget low. It is from the distillery in the bar that ‘Endemic’ was launched.

“Not only the birds, plants, frogs and coco de mer can be endemic to Seychelles, things that are only produced in Seychelles can also be endemic,” said Liapoun, explaining why he gave the name to the product.

Over the past three years, the range of handcrafted infused rum has increased to 15 flavours including vanilla, lemon, ginger, spiced, mango and others. The latest flavour added to the range is coconut. The bottled versions of rum, produced with handcrafted syrups, caramel and honey, are sold at around $21.

Almost every Wednesday, Liapoun makes sure that he is present at the Bazar Labrin, a weekly fare in the northern Mahe district of Beau Vallon where local products and food are for sale. It gives people who are interested, a chance to taste his products.

The founder of the rum range said that he focuses on the local market to get what he needs. Depending on the ingredient he is after, Liapoun can go to the local markets or buy them in bulk from different suppliers. He makes sure to get the maximum of fruits during the high seasons, which he stores for use later.

In future, Liapoun would like to expand his range of rums further with new unique flavours and ideas.

OECD to review impact of Seychelles' laws on IBCs in 2022