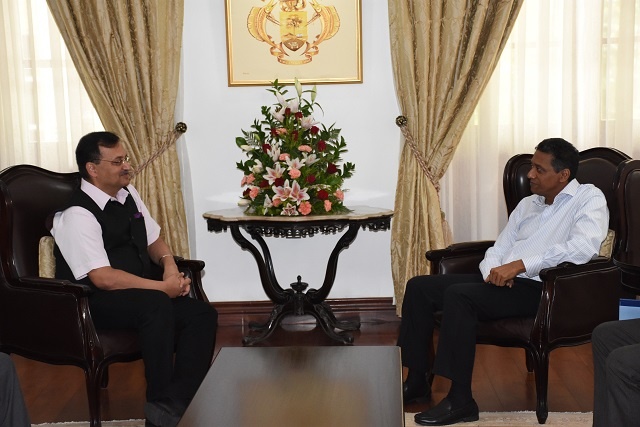 Patnaik said as the Joint Secretary for the Indian Ocean Region, it is his responsibility to visit the country once a year and monitor the progress of ongoing projects. (Joena Meme)

Currently on his first official visit in Seychelles, Dinesh Patnaik told the press that during his meeting with President Danny Faure at State House, Victoria, the two diplomats discussed the status of projects that India is implementing in Seychelles.

“We are working with the government of Seychelles to ensure that these projects are implemented at the earliest so that they benefit the people of Seychelles. The president wanted a briefing on the status and position of these projects,” said Patnaik.

He explained that projects that touch the people are of importance in India.

Patnaik said that in the capacity as the Joint Secretary for the Indian Ocean Region, it is his responsibility to visit the country once a year and monitor the progress of ongoing projects. During such visits, he looks at how the High Commission is performing and discuss other potential areas of cooperation with high officials in Seychelles.

Seychelles, an archipelago in the western Indian Ocean, and India established diplomatic relations on June 29, 1976. Since then, the two countries have been collaborating in areas such as defence, maritime security, energy, agriculture, health, and capacity building.

During his visit to Seychelles, Patnaik also met with the Secretary of State for Foreign Affairs and the Blue Economy, Barry Faure, and other high officials at the Department of Foreign Affair. Discussions touched on various subjects on cooperation between Seychelles and India.

The meeting was followed by a short ceremony for the signing of five Memorandum of Understandings (MoU) under the Small Development Project (SDP) Grant.

The Designated Minister, Macsuzy Mondon, in her capacity as the Minister for Local Government and Culture, signed the MoU’s for the Mobile Library Project and two others for small community development projects.