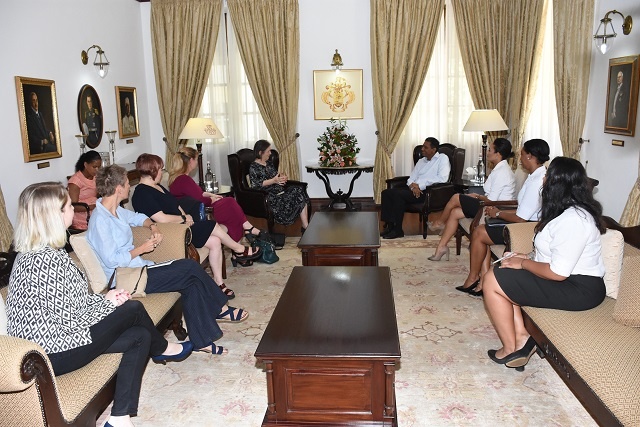 The Commonwealth delegation met with President Faure at State House in the capital, Victoria. (Joena Meme)

(Seychelles News Agency) - The importance of the Commonwealth to ensuring good governance and the respect of human rights was the focus of discussions between the Seychelles’ President and a delegation from the Commonwealth Parliamentary Association (CPA) on Tuesday.

The delegation met with Faure at State House in the capital, Victoria.

The head of the delegation, Tessa Blackstone, said that in line with good governance, the president has shared some of his vision as the head of state.

"He talked a bit about what it means to be president here and that he wants to be a little bit above politics, play a head of state role, and at the same time, engage in the issues that affect the people of this country and to try and improve their conditions," said Blackstone.

The delegation and the President also discussed Seychelles’ association with the Commonwealth and the shared values and principles it upholds in the areas of democracy, human rights and good governance.

A press release from State House said, “President Faure noted that Seychelles remains committed to cementing the excellent bond that Seychelles and the CPA share on a bilateral and multilateral level.”

He expressed his hope to see renewed efforts to elevate the cooperation to new heights following their visit.

Members of the delegation also met with Vice President Vincent Meriton where discussion revolved around the blue planet and climate change.

Earth is seen as a blue planet since the ocean, which covers more than two-thirds of its surface, is home to an incredible variety of species. In April last year, the 53 countries of the Commonwealth adopted the Blue Charter through which members will actively co-operate to solve ocean-related problems and meet commitments for sustainable ocean development.

During their official visit to Seychelles, a group of 115 islands in the western Indian Ocean, the delegation is meeting with members of the National Assembly and of the Cabinet of Ministers.

The delegation is also expected to hold a seminar and share knowledge about how different sectors operates in the UK as well as how UK’s parliamentary process is working.

Seychelles joined the Commonwealth in 1976 and since then the island nation has received a great support from the voluntary association of 53 independent and equal sovereign states, especially on ocean issues.

An ocean governance internship programme under the Commonwealth Youth Council exposed at least 30 young people to blue economy employment in 2017.  In addition, the Commonwealth has carried out feasibility studies on new sectors such as aquaculture, marine biotechnology and marine renewable energy, while also advising the government on national ocean policies and governance regimes.