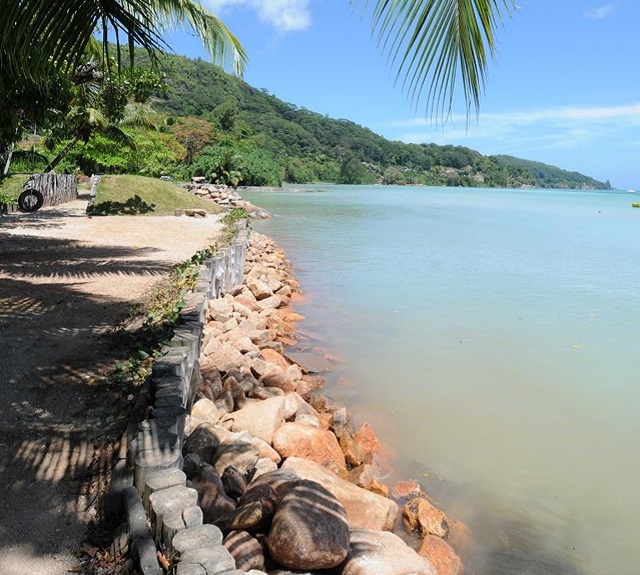 The rehabilitated coastline at Anse La Mouche through a 3-year project after it was subjected to degradation and erosion. (Patrick Joubert)

This is possible now that the island nation has been allocated $6.6 million from the seventh replenishment of the Facility.

The Ministry of Environment, Energy and Climate Change on Thursday met with key partners, researchers as well as not for profit organizations to discuss the priority areas and put forward ideas for potential projects.

“Nowhere is the inextricable connection between people’s well-being, economic prosperity and the environment clearer than on small islands. Since its inception, the GEF has been a strong partner and supporter of environmental programmes that promote sustainable development in Small Island Developing States (SIDS),” said Minister Wallace Cosgrow at the national dialogue held at the Savoy Resort and Spa at Beau Vallon.

The environment minister added said that funds are much needed in priority areas with many challenges.

“Land in Seychelles is a scarce resource, land-use pressure is intense, and the government has to juggle the needs of a growing population for land and housing, and the demands for ever more tourism development, with its commitment to the environment and biodiversity conservation,” said the Minister.

Cosgrow added that “Seychelles, like other countries, also face challenges from climate change and unsustainable use of natural resources with the support of GEF funding, the government and civil society are able to tackle these issues head-on.”

Wills Agricole, GEF’s operational focal point, said that the overall goal is to use the funds to further protect the island nation’s environment.

“Past projects have benefitted our country a lot, especially where the protection of our endangered species is concerned and preventing their disappearance. Not forgetting the capacity building aspect, this has made us more knowledgeable in dealing with challenges in our environment sector,” said Agricole.

The funds received are expected to be used over the next four years. More resources are expected to be allocated to biodiversity. Also this year, GEF funds will not be used to support adaptation projects as there other funding opportunities available for such.

GEF has been supporting projects in Seychelles – a group of 115 islands in the western Indian Ocean - since 2008 at a cost of $25 million.

Over the years, a series of projects under different thematic areas has provided essential support to the development planning process, establishing a legal framework for environmental and land-use planning; addressing prioritisation of land management issues and expansion of the Protected Area system, as well as marine spatial planning.

Other implemented projects were those which explored innovative Protected Area management scenarios and financing mechanisms and mainstreaming biodiversity into the tourism and fisheries sectors that together employs half the population.

GEF funds are available to the developing countries and countries with economies in transition to meet the objectives of the international environmental conventions and agreements.

Following the dialogue, a National Steering Committee will be established to provide high-level policy guidance and orientation to the national project formulation for, resulting in the project concepts to be then submitted to GEF Secretariat for approval by the end of April.