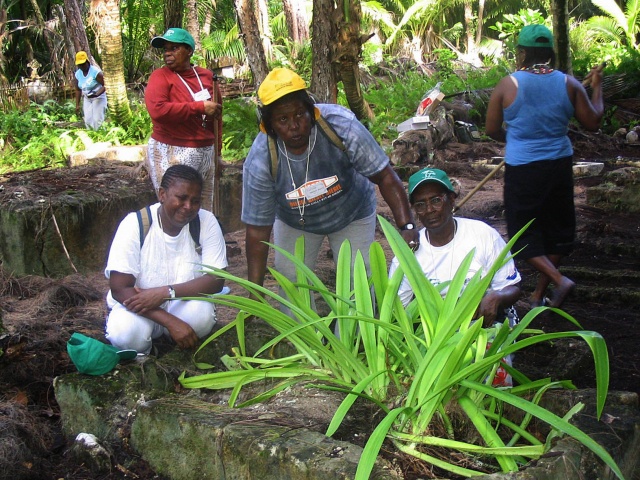 Chagosians weep at the grave of their parents on Peros Banos Island 10 April 2006. Some 102 Chagosians who were evicted from the idyllic Indian Ocean archipelago by Britain in the 1960's and 1970's, arrived on April 4 for a brief trip which took them to three islands, Diego Garcia, Peros Banos and Salomon, in the chain which has been the subject of bitter diplomatic and legal disputes since Britain claimed it in 1965. About 2,000 Chagosians were expelled and sent to live mainly in Mauritius and the Seychelles where only about 850 island-born natives are still alive. However, they and their descendents now number about 7,000. (AFP PHOTO STR

(AFP) - The UN' top court will hand down its view Monday in a bitter dispute between Britain and Mauritius over the fate of the Chagos islands, home to key UK and US military base.

Judges at the International Court of Justice will give their opinion on the future status of the remote Indian Ocean archipelago housing the US base of Diego Garcia, leased from Britain on territory claimed by Mauritius.

Colonial power Britain between in the late 1960s and early 1970s evicted around 2,000 Chagos islanders to Mauritius and the Seychelles to make way for the base, in a lease which expires in 2036.

Chagos islanders -- who have been banned from visiting the islands without special authorisation -- have been fighting for their return since first launching legal action in 1975, with some receiving compensation from London in 1982.

In a new diplomatic blow to Britain, the UN General Assembly in 2017 adopted a resolution presented by Mauritius and backed by African countries asking the ICJ to offer legal advice on the island chain's fate.

The ICJ's 15-judge bench will now hand down a non-binding "advisory opinion" at 1400 GMT at its headquarters at the Peace Palace in The Hague.

London split off the remote islands from Mauritius three years before Port Louis gained independence in 1968. Their status has since been at the centre of a bitter dispute spanning five decades.

During the Cold War, London established a combined military base with the US on Diego Garcia, the largest of the islands, which was a key staging ground for bombing campaigns in Iraq and Afghanistan.

Judges heard the case in September, with Mauritius arguing that it was illegal for London to break up its territory while still under colonial rule. Its case was backed by India.

Chagos, said Port Louis' lawyers, was "integral to Mauritius" and that the decolonisation process of the island group "remains incomplete."

Britain in turn apologised for the "shameful" way it evicted thousands of islanders but insisted Mauritius was wrong to bring the case to the ICJ.

The US meanwhile said the court had a "duty" not to take a position on the row.

Experts said that should the ICJ's judges give an opinion, it is most likely to revolve around the legality of Britain's move to split Chagos from Mauritius -- which lies some 2,100 kilometres (1,300 miles) to the southwest.

"The main question will be whether separating the two was -- at the time -- a breach of international law in the sense that it did not respect the right of self-determination of the Chagossians," said Eric De Brabandere, a professor of international law at the University of Leiden.

"Then the question is whether the continued administration by Britain has any consequences," he told AFP.

"I think that the court will say something about the right to self-determination of the Chagossians now, and the need to complete the decolonisation process," he said.

But, "as usual it is difficult to predict," de Brabandere said.

While the ICJ's "advisory opinion" is not binding, it still carries weight and a finding in favour of Mauritius may strengthen its hand in future negotiations over the Chagos islands.

It could also lay the foundation for an eventual formal claim before the ICJ, which was set up after World War II in 1946 to rule in disputes between United Nations member states.

In the 1970s, it offered proximity to Asia during the fall of Saigon and the Khmer Rouge takeover in Cambodia, and as the Soviet navy extended its influence in the region.

The ICJ -- which rules in disputes between countries -- is not often called upon to hand down so-called advisory opinions, which is usually called for when a UN body needs legal advice.

In 2010, the ICJ concluded in an advisory opinion that Kosovo's declaration of independence two years earlier "did not violate international law."