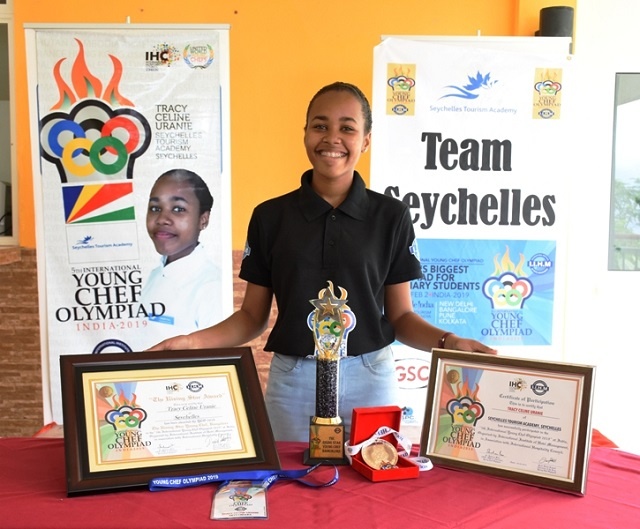 Uranie is the first Seychellois to receive such an award at the competition. (Seychelles Nation)

Tracy Uranie, 17, is in her second year of studies at the Seychelles Tourism Academy.

Uranie is the first Seychellois to receive such an award at the competition, which the academy has been participating in for the past four years. “It was determination, despite the tough competition which made me won the award,” said the young chef who is excited and elated from the experience.

Uranie, who did not finish the competition because of a cut to her fingers, still managed to impress the judges with her dish which she finished after the set time.

“I was working on two dishes. They were in the oven and at the same time l was preparing two sauces and chopping some spices to accompany the dishes. As I was also managing my time on the big screen, I turned to see how things were in the oven and it was at that moment that I cut my finger while chopping the spices. It was very painful and I cried,” recounted Uranie.

The first round was basic culinary to test their basic skills. They were to prepare the same dish - a chicken menu with potatoes plus another international dish known as ‘Rhum Baba’. In the second round the young chefs had to prepare a vegetarian dish and another with prawns. In the last round, they had to create their own dish from a given basket of ingredients.

Uranie, who is following in her father’s footsteps as a chef, was chosen to represent Seychelles Tourism Academy at the Olympiad after winning an internal culinary competition held in the first quarter of 2018 and which saw the participation of 18 first year, second year and management students.

In preparation, for the international competition, Uranie had spent seven months of intense preparation, under the guidance of culinary mentors from the academy as well as from other chefs from the private sector.

“The award is a great achievement for STA and Seychelles which shows that young Seychellois have the capability to shine anywhere only given the opportunities to do so, something that STA is doing at the moment,” said Murla Gabriel, Senior Coordinator from the academy.

Gabriel along with another chef from the academy accompanied the student at the competition. According to Gabriel it is the first time that a Seychellois culinary student has received such a high-level recognition in an international culinary competition.

For her achievement, the aspiring chef has been invited to participate in the 6th International Young Chef Olympiad in 2020.