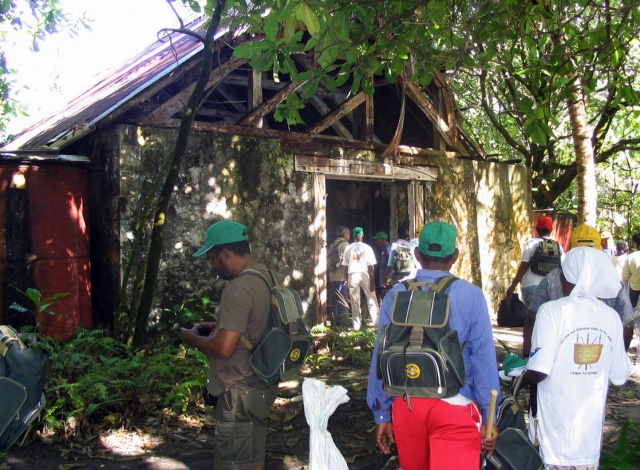 Chagosians check their run-down church on Peros Banos Island 10 April 2006. Some 102 Chagosians who were evicted from the idyllic Indian Ocean archipelago by Britain in the 1960's and 1970's, arrived on April 4 for a brief trip which took them to three islands, Diego Garcia, Peros Banos and Salomon, in the chain which has been the subject of bitter diplomatic and legal disputes since Britain claimed it in 1965. About 2,000 Chagosians were expelled and sent to live mainly in Mauritius and the Seychelles where only about 850 island-born natives are still alive. However, they and their descendents now number about 7,000. (AFP PHOTO STR
STRINGER / AFP)

(AFP) - Britain separated the Chagos Islands from its colony Mauritius more than 50 years ago, expelling the entire population to make way for a strategic US military base.

Britain's 1965 acquisition of the remote Indian Ocean archipelago of about 55 islands has been disputed ever since, with Mauritius demanding its return.

As the UN's International Court of Justice (ICJ) prepares to give a legal opinion on the long-running case on Monday, here is some background.

Located several hundred kilometres (miles) south of the Maldives, the Chagos Islands were colonised by France in the 18th century and African slaves shipped in to cultivate coconuts and copra.

After the abolition of slavery in 1834, Indian workers arrived and mixed with the first settlers.

Only three of the islands were inhabited: Diego Garcia, Salomon and Peros Banhos.

In 1965 Britain separated the Chagos islands from the rest of Mauritius, then a semi-autonomous British territory and eyeing independence, paying three million pounds for them.

Between 1968 and 1973 around 2,000 Chagos islanders were evicted, described in a British diplomatic cable at the time as the removal of "some few Tarzans and Man Fridays".

Most were shipped to Mauritius and the Seychelles.

Mauritius argues it was illegal for Britain to break up its territory. It claims sovereignty over the archipelago and demands the right to resettle former residents.

The US military base on Diego Garcia, the largest island, became of major strategic importance during the Cold War.

It offered proximity to Asia as an assertive Soviet navy was extending communist influence in the Indian Ocean.

After the 1979 Iranian revolution, the United States expanded the base to receive more warships and heavy bombers.

In recent years it served as a staging ground for US bombing campaigns in Afghanistan and Iraq.

Chagos islanders living in Mauritius launched legal proceedings in 1975 against their expulsion, resulting in a 1982 payment of four million pounds in compensation along with land valued at one million pounds.

There were no reparations for islanders settled in the Seychelles.

In 2007 a British appeals court paved the way for Chagossians to return home but its decision was annulled by the upper House of Lords the following year.

In 2016 the British government confirmed its opposition to the resettlement of Chagossians, including for reasons of defence, security and cost.

Today around 10,000 Chagossians and their descendants are divided among Mauritius, the Seychelles and Britain.

In 2010 Britain declared the islands part of a Marine Protected Area, arguing that people should not be permitted to live there.

Diplomatic cables revealed by WikiLeaks quoted a British official as saying the plan "put paid to the resettlement claims of the archipelago's former residents".

The move backfired as a UN arbitration tribunal declared it illegal in 2015.

In September 2018 as hearings opened before the ICJ, the UN's top court, Britain apologised for the "shameful way" it evicted Chagos residents but insisted Mauritius was wrong to bring the dispute to the court.

The US urged the court to stay out of the row.