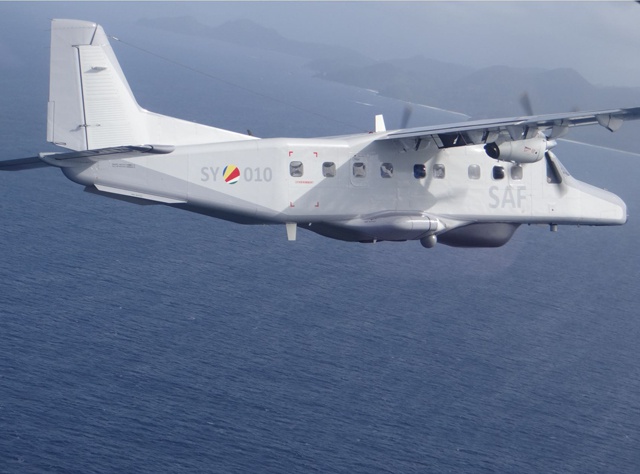 (Seychelles News Agency) - New recruits of the Seychelles’ Air Force (SAF) are currently undergoing a four-week training programme that will empower them with essential skills and knowledge of the specialized formation within the Seychelles Peoples Defence Force (SPDF) that they serve.

The programme was developed by the officers from SAF in cooperation with the SAF’s embedded Surveillance Aerial Maritime Expert from EUCAP Nestor, a European-Union-funded initiative which works towards training and enabling countries around the horn of Africa and the western Indian Ocean to fight piracy in the region.

In an email interview with SNA, Major Michael Pouponneau, Commander of the SAF said the Basic Unit Familiarization Training was designed as an induction programme for aspiring airmen wishing to take a career in aviation-related fields.

The SAF, which currently employs around 40 staff, including civilian employees, is running the training for six new recruits, who train every morning from Monday to Friday. The training includes information about the organization, aircrafts and mission systems, administration, operational and maintenance basics, meteorology, emergency training such as firefighting, first aid and evacuation training as well as a demo flight with one of SAF aircrafts.

Regarded as an essential milestone by the SAF, the programme is expected to be held in the future on a regular basis for new recruits.

“While undertaking this course, the trainees have to undertake other regimental and operational duties in addition to their studies,” Pouponneau says. “As we modernize, it is important for the Seychelles Air Force establish a stepping stone for its members to at least provide an orientation towards their respective career paths.”

Pouponneau who has over twenty years’ experience in aerial surveillance. He has been embedded in the Seychelles Air Force since the beginning of the year in order to deliver capacity building, advice and mentoring.

Additionally, he also plays a supporting role to the Commanding Officer of the SAF in his efforts to strengthen the organization’s institutional and operational capacity.

“Being involved in this training is a milestone for EUCAP Nestor in the Seychelles,”  Giulio Piroddi, the acting Head of the EUCAP Nestor Office in the Seychelles, said at the opening of the training at the SAF base.  “We are very pleased to assist the SAF in strengthening its maritime surveillance capacity as it is one of our most important partners operating in the Maritime Security field.”

Despite recent maritime incidents, Seychelles not slowing down drug fight at sea: official