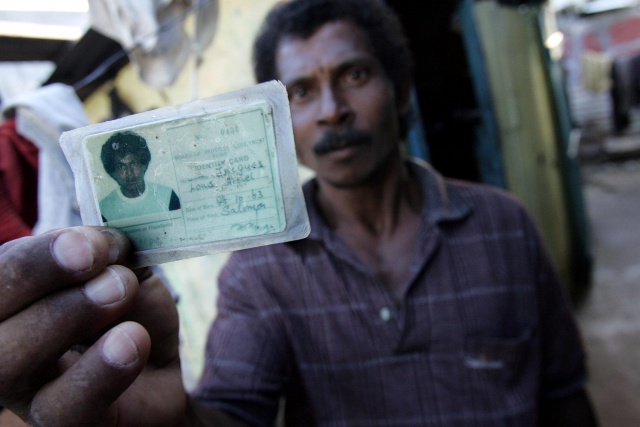 Jaques Louis Arniel shows, 17 January 2005 in Port Louis, Mauritius, his identity card stating his birth place as the Solomon Island, Chagos. Arniel, like all his fellow islanders were removed from the Chagos chain after Britain decided in 1965 to keep the chain of islands as British Independent territories for their strategic purposes. The largest island, Diego Garcia was leased by the British to the US in 1975 and has reportedly become the site of a highly classified military prison where high value Al-Qaeda suspects have been interrogated. The islanders have been fighting for adequate compensation but above all the right to return. (AFP PHOTO/MARCO LONGARI)

(AFP) - Exiled as children, people from the Chagos Islands celebrated on Tuesday the news that the United Nations' top court had told Britain to give up control of the Indian Ocean archipelago.

"The English would never have believed that one day, the people of Chagos would have overthrown them," said Emilienne Louis, describing how she arrived in Mauritius at the age of four - and has never been able to return.

"We have been waiting for this good news for a long time," said Louis, who celebrated the decision along with other -- many now elderly -- exiled Chagossians in Mauritius, where they have made their home ever since.

Louis dreams of being able to die on the island where she was born.

The UN's International Court of Justice in The Hague said in a legal opinion on Monday that Britain had illegally split the islands from Mauritius before independence in 1968, after which the entire population of islanders was evicted.

It is a major development in a decades-old row with Mauritius over an archipelago that is now home to a huge US airbase. The court's opinion is non-binding but carries heavy symbolic and political weight.

The islanders danced in the streets waving the flag of the country they were barred from -- horizontal strips of orange, black and blue -- when they heard the news.

But others sounded a note of caution that their decades long fight was far from over.

"The Chagossians have not yet really understood what happened," said Rosemond Saminaden, aged 83, and one of the elders urging people to wait for the leaders who were in The Hague at the court hearing to return and explain the decision.

Colonial power Britain split off the islands from Mauritius -- which lies around 1,200 miles (2,000 kilometres) away -- three years before Port Louis gained independence in 1968. It also paid Mauritius three million pounds.

Between 1968 and 1973 around 2,000 Chagos islanders were evicted and sent to Britain, Mauritius and the Seychelles, to make way for a military base on Diego Garcia, the largest of the islands.

Britain has defended its hold on the islands, saying the military base, which is leased to the United States and has been used to bomb Iraq and Afghanistan, protected people around the world.

"We know the road will be long," Saminaden said, pointing out that there was now nothing to go home to. "We will not be able to return to the island without the basic infrastructure on the island."

Alain Volfrin, sitting in the street in front of his house, a neighbourhood where many of the Chagos islanders now live, said that the court had finally shown what they had been saying for decades: Britain had been acting illegally.

But he is also resigned to the fact that it will be unlikely he and his fellow Chagossians will return to the island anytime soon.

"We do not know yet how the Chagossians will benefit," he said gloomily. "Because it is clear that the return of the Chagossians in the archipelago is not for tomorrow."