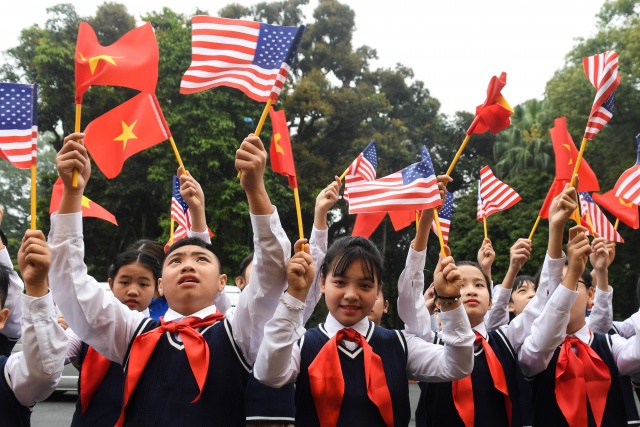 Children wave US and Vietnamese flags before the arrival of US President Donald Trump for a meeting with his Vietnamese counterpart in Hanoi on February 27, 2019, ahead of the second US-North Korea summit. Trump and North Korean leader Kim Jong Un meet on February 27 in Hanoi for the second date in an unlikely friendship that the US president hopes will push North Korea's reclusive leader closer to reaching a deal on his nuclear arsenal. (Saul LOEB / AFP)

(AFP) - Donald Trump and Kim Jong Un meet Wednesday in Hanoi for the second date in an unlikely friendship that the US president hopes will push North Korea's reclusive leader closer to reaching a deal on his nuclear arsenal.

Trump touched down late Tuesday on Air Force One after flying half way around the world from Washington, while Kim arrived earlier, following a two-and-a-half-day train journey from Pyongyang.

On completing their marathon trips, the protagonists of international diplomacy's most surprising bromance were treated to joyful welcomes from crowds of excited, flag-waving onlookers across the Vietnamese capital.

But much of their schedule was shrouded in mystery, and the summit has been preceded by few of the usual preliminary negotiations, with some of the arrangements still being ironed out in Hanoi on Tuesday.

Starting with a brief conversation followed by dinner Wednesday, then in more talks Thursday, Trump and Kim aim to build on their startling initial meeting in Singapore last June.

While that first summit ended with a vague statement promising to work "towards complete denuclearisation of the Korean peninsula", they have since disagreed on what that means, and this time Trump in particular faces pressure to deliver concrete results.

On the plus side, there has been more than a year without North Korea rattling its neighbours with rocket and nuclear tests.

But the isolated state has done nothing to roll back the arsenal it has already built, and Trump's own top intelligence advisers say Kim remains determined to keep the one weapon he believes can guarantee his regime's survival.

And while Trump left Singapore claiming that North Korea is "no longer a nuclear threat", analysts dismiss that as "patently false" and Pyongyang is believed to have spent the intervening time quietly expanding its capabilities.

"Thank you to all of the people for the great reception in Hanoi. Tremendous crowds, and so much love!" Trump tweeted after reaching his Hanoi hotel from the airport.

Earlier, Kim got a similar reception from excited locals when he visited the North Korean embassy under heavy security.

"Trump is someone who has a strong character. His words are followed by actions," said one admiring Hanoi resident, Le Dinh Hung, who carried a painting of Trump that he wanted to give him.

The US president, who left behind a mounting tide of legal and political troubles in Washington, will be hoping he can carry those good vibes into the summit.

Long gone are the days when he ridiculed Kim as "rocket man" and Kim responded by calling him a "mentally deranged US dotard". Now Trump talks of "love" between them.

And in the run-up to the summit he suggested that if the North gave up its weapons, it could be transformed from an isolated fortress state to an Asian economic tiger -- much like Vietnam, a communist country that embraced capitalism and buried its confrontation with the United States.

But the North is rated as the world's least investable country by global risk assessment firm Verisk Maplecroft.

"With complete Denuclearization, North Korea will rapidly become an Economic Powerhouse," tweeted Trump. "Without it, just more of the same."

With Congress investigating Trump for alleged illegal activities and also preparing to try and stop his controversial use of executive power to fund the construction of a US-Mexican border wall, the president would dearly like to change the news narrative by proclaiming a dramatic win.

Critics of Trump say he is so keen to deal with Kim that he could give away too much in his desire to make headlines, even endangering long-standing allies South Korea and Japan. In Singapore, Trump took his own generals by surprise when he announced a suspension of military exercises with the South -- something the North badly wanted.

But the time for empty gestures is also over, analysts say.

"The window for diplomatic progress with North Korea will not remain open indefinitely. The second summit... must emphasise substance over pageantry," said Kelsey Davenport from the Arms Control Association.

For Washington, this would ideally include getting Kim to dismantle the key nuclear facility at Yongbyon, allow in international inspectors, or even hand over a full list of all the country's nuclear assets -- something the North Koreans have categorically refused to do.

In return, Trump is believed to be considering dangling relief from tough international sanctions. Opening of diplomatic liaison offices is another possible US concession.

And Trump could go further by making a hugely symbolic declaration that the 1950-53 Korean War is over, after hostilities ended with a ceasefire but no peace treaty.

However, every potential move is fraught with danger.

North Korea has proved expert for many years at stringing along American presidents while continuing to pursue its nuclear ambitions.

And the rarely restrained Trump appeared to downplay expectations before he flew to Vietnam, stressing that continued suspension of missile and nuclear tests was what mattered most, and suggesting that more summits may be needed.

"I don't want to rush anybody. I just don't want testing," Trump said at the weekend. "As long as there's no testing, we're happy."

General » Be a reporter: Write and send your article » Subscribe for news alert
Tags: US, NKorea, summit, nuclear