A lemur on the loose in Seychelles has been caught; officials discussing next step 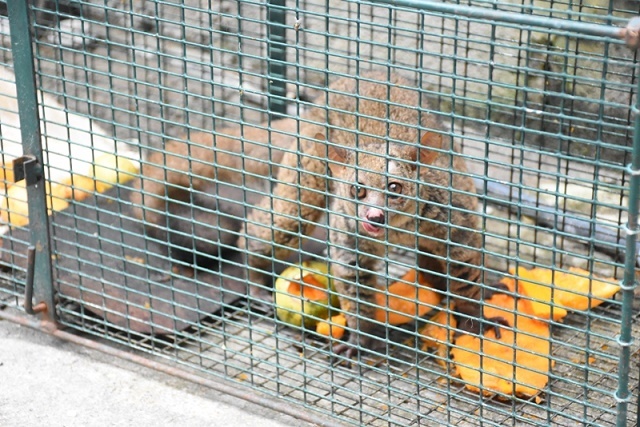 The lemur was caught last Thursday in one of the traps set by a team from the agency at Sans Soucis. (Seychelles Nation)

(Seychelles News Agency) - A lemur loose in Seychelles since early 2018 has been caught. The National Biosecurity Agency is consulting with other authorities to determine the best way to deal with the exotic species.

The lemur -- nicknamed King Julian locally -- was caught last Thursday in one of the traps set by a team from the agency at Sans Soucis, located in the mountainous areas of the central district of Bel Air. Two traps were set after a man who lives in the area reported that he had sighted the exotic animal.

Lemurs are prosimians, one of two types of primates belonging to the family Lemuridae. They are native to Madagascar.

At the moment the lemur is being kept under observation at the veterinary services. The principal biosecurity officer at the biosecurity agency, Randy Stravens, told SNA that before any actions can be taken with the animal, there must be discussions.

“Repatriating it is an option but the decision is one that cannot be taken in isolation. We need to involve all the relevant stakeholders, including the Ministry of Environment to discuss risks, the cost and other implications,” said Stravens.

To determine to which country the lemur is to be repatriated, it must first be established where it originated and to do that, officers have to identify the type of lemur it is. It is believed that this particular lemur originated from central or southern Africa.

According to the officer, the lemur arrived in the country on a cargo vessel coming into the country, suspected from Zanzibar. It was first sighted in the area of the new port and later at Mont Fleuri on the outskirts of the capital city of Victoria. Efforts to catch the animal in these areas where fruitless.

Ashley Dias, the director of the Biodiversity Conservation Section at the Ministry of Energy, Environment and Climate Change, said that the introduction of an exotic species in the country can pose several threats to the ecosystem of the archipelago of 115 islands in the western Indian Ocean.

“Being a mammal, there is a possible that lemurs carry diseases that can affect local species or even human. The lemur that was caught was in direct competition with local species especially in the hunt for food,” said Dias.

Lemurs feed on fruits and insects. Blood tests will be carried out to see if the caught lemur is carrying any disease.

Stravens told SNA that in cases where foreign species are found on vessels, actions are taken to send the boat back to the port of origin, together with the animal onboard. The captain of the ship is also fined.

The officer of the National Biosecurity Agency outlined that the biosecurity of the country depends on all citizens who are encouraged to contact relevant authorities in the event that a suspected exotic animal is sighted.