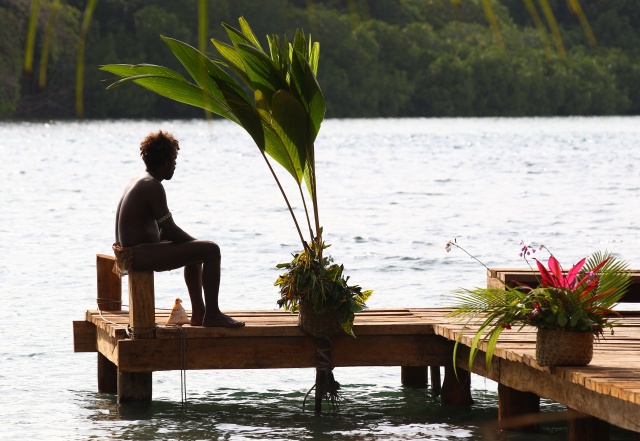 A man from a village waits to blow a conch shell on the jetty where Britain's Prince William and his wife Catherine, the Duke and Duchess of Cambridge, will arrive at Marapa Island on September 17, 2012. Britain's Prince William and wife Catherine headed to a secluded corner of the Solomon Islands in a war canoe as their lawyers lodge a criminal complaint in France over topless photos of her. (AFP PHOTO / POOL / Rick RYCROFT)

(AFP) - Australia is ramping up efforts to tackle an oil spill from a cargo ship stranded in World Heritage-listed waters in the Solomon Islands as fears grow of spiralling environmental damage, Canberra said Sunday.

Around 75 tonnes of heavy fuel oil have leaked into the sea amid failed salvage attempts, while more than 600 tonnes of the oil remains on the stricken 225-metre (740-foot) vessel.

"Given escalating ecological damage, and a lack of action by commercial entities involved, the Solomon Islands government has requested Australia's assistance," Foreign Minister Marise Payne said in a statement.

"In response, we are mobilising an offshore pollution mitigation operation, including equipment, vessels and specialised personnel."

The operation will be run by Australian Maritime Safety Authority (AMSA) and will work alongside the Solomons' own efforts.

AMSA has been using aerial surveillance to monitoring the unfolding environmental disaster, while New Zealand on Friday dispatched two oil spill containment specialists to the area.

Rennell Island is the largest raised coral atoll in the world and includes a UNESCO World Heritage site which extends kilometres out to sea.

The islanders rely on waters in the ecologically delicate region for their livelihoods.

The Solomon Trader is registered in Hong Kong and operated by a Hong Kong-based company, but its ownership is unclear.