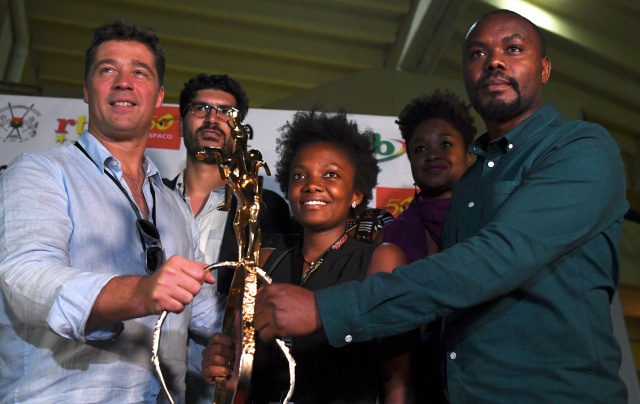 Rwanda's film Director Joel Karekezi (R), winner of the 26th Pan-African Film and Television Festival (FESPACO) for "The mercy of the jungle", his producer Aurelien Bodinaux (L) and actress Nirere Shanel (C) hold the Yennenga Stallion trophy at the Sports Palace in Ouagadougou on March 2, 2019. Africa's biggest film festival is marking its 50th anniversary, buoyed by its contributions to the continent's cinema industry but overshadowed by security concerns in host country Burkina Faso. (ISSOUF SANOGO / AFP)

The film was among 20 vying for the top Golden Stallion of Yennenga award at the Pan-African Film and Television Festival of Ouagadougou (Fespaco).

A road movie focusing on the wars in Democratic Republic of Congo through the eyes of two soldiers lost in the jungle, it also picked up the best actor award for Belgian Marc Zinga.

Egyptian director Khaled Youssef won second prize for his drama "Karma", while third prize went to Tunisia's Ben Hohmound for "Fatwa" about a father who discovers that his dead son had been a jihadist.

In the half century since it was established, Fespaco has never awarded its top prize to a female director -- a fact that faced uncomfortable scrutiny during the week-long event.

Only four of the films in competition at the festival were directed by women.

"Where are the women?" asked South African actress Xolile Tshabalala, who starred in "Miraculous Weapons" made by Cameroonian director Jean-Pierre Bekolo.

"Can it be that in 50 years, there hasn't been a single woman capable of telling a great story to win the Fespaco?"

Burkinabe director Apolline Traore whose film "Desrances" won a special prize on Friday said recognition had to be on merit, not a token gesture in the fight against discrimination.

But she added: "Of course there's a problem" in gender equality for directors.

"There's no equality for the craft of a woman director, not just in Africa, but in the world," she said.

Encouraged by the #MeToo movement, some took the opportunity to use the festival to also highlight alleged sexual abuse within the African film industry.

"It's time to speak out," said French actress Nadege Beausson-Diagne, who told AFP that she was setting up the movement called #Memepaspeur ("Not even scared") to help women speak out in Africa.

Violence "is everywhere -- against actresses but also directors, scriptwriters and technicians, who live with harassment, sexual aggression and rape," she said, adding that she had twice been assaulted during film shoots in Africa.

An online petition was launched urging Fespaco to exclude a TV series from the competition after an actress accused its director of assault. The director, reached by AFP, refused to comment.