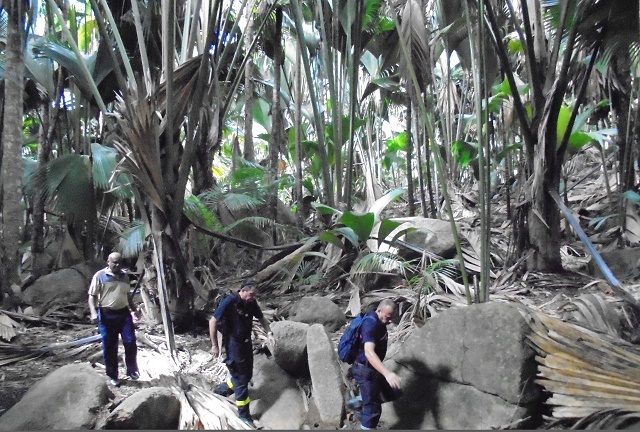 The experts conducted a survey of the national parks and special reserve on Praslin, home to the endemic coco de mer and the Vallee de Mai. (Johan Mendez)

Two firefighters from Reunion – a French department in the Indian Ocean - conducted an audit and needs assessment inventory of gaps and needs of the agencies on the island end of February.

The experts also conducted terrain and field observations of affected sites, a survey of the national parks and special reserve on Praslin, home to the endemic coco de mer and the Vallee de Mai, a UNESCO’s World Heritage Site.

It is the ecosystem-based adaptation (EBA) to climate change in the Seychelles project which is supporting the implementation of the fire contingency plan.

The National Park and Vallee de Mai are critical ecosystems for the island in terms of water supply, soil stability, biodiversity, world heritage and tourism revenues, said Johan Mendez, EBA's project consultant. "As we know fire is a historical major threat for Praslin forests and climate change will worsen the risk,” he said.

Mendez said, “in this optic and in the case of a major fire occurring here, the country would seek assistance with neighbouring partner, being in the region and member of the Indian Ocean Commission.”

According to Mendez, firefighters in Reunion have in the past dealt with substantial forest fires. “In 2011, there was a massive forest fire that Reunion had to deal with within their UNESCO’s site which was in the Maido forest where the area burnt represented the size of Praslin,” said the consultant.

Mendez added that “Reunion has got the experience of sensitive national park forest fire, and this includes coordination between services such as fire brigade, national park authorities, amongst others.”

The two experts, Lieutenant Colonel Henri-Claude Pothin and Captain Christian Martin, said that it was important for the Seychelles – 115 islands in the western Indian Ocean – to learn from their experience.

“We want to make Seychelles benefit from our experience where we lost 2,800 hectares in our National Park, also listed as UNESCO site so that this type of incident is not repeated.”

Pothin added that “this will initiate a dynamic and collective consideration of the risk of forest fires and the need to put in place the means to protect to the maximum the beautiful forests of Praslin. As a result avoid erosion issues, losing your heritage biodiversity and ecosystem services that would have an irreversible impact on tourism, fisheries and livelihood.”

The experts said that the massive forest fire like the Maido in Reunion had an impact on tourism revenues and water supply.

Mendez said that the expertise of the two firemen are much needed as the EBA project seeks to establish protection measures over water supply catchment areas and aims to rehabilitate forest ecosystems on burnt, degraded land.

“Furthermore the project seeks to create resilient communities by building the capacity of the project stakeholders and partners in watershed management. The fire context on Praslin make it a must to have a comprehensive fire contingency plan which is not the case at present” said Mendez.

During their visit, Pothin and Martin met and had discussions with local firefighters, as well as with other relevant agencies such as the Seychelles National Parks Authority and the Seychelles Islands Foundation.

Apart from conducting institutional analysis, audits and undertake site visits to understand the island’s context. The experts also took part in a consultative workshop which was held to provide a platform to discuss and coordinate the long term capacity building of relevant partners in forest fire fighting.

“We wait for the recommendations from this audit mission but as a way forward, we hope to train firefighter for forest interventions, acquire material for the different partners as well as setting up joint exercises,” concluded Mendez.