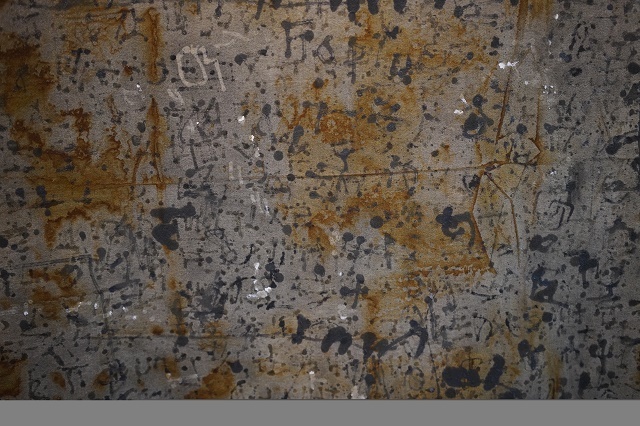 Although Radegonde does his work on canvas paper, he uses unconventional and raw materials to create the pieces. (Marivel Media)

(Seychelles News Agency) - Canvases with scribbles of words or scenes from the streets are what visitors can see at a five-piece exhibition by Seychellois contemporary artist Leon Radegonde.

Called ‘échantillons,’ meaning samples, the exhibition is currently being showcased until March 8 at the Alliance Française in the central district of Mont Fleuri.

The exhibition got its name from the pieces that were selected from an already existing collection Radegonde created back in 2017.

Radegonde is unapologetic in the way he creates his work. It is done on canvas paper but he uses unconventional and raw materials to create the pieces. Motor oil, soil, and even beer are used to give a weathered look to the canvas until it reaches the wanted brown colour and carpet-like texture.

“I do not want my work to be called beautiful, otherwise I would have used colour and paint - rather it is something that I do for myself, and if someone likes it then that’s good,” he told SNA.

The artist works include scribbling on the canvas various words he sees and sometimes from things he observes when walking along the streets.

And if he makes a mistake on the artwork? He simply leaves it there.

“Much like in life, we make mistakes, but we must not dwell on them and simply move on. That is what I do with my art, I simply cross it out and then write or draw on top what I wanted,” he explained.

Radegonde who discovered his passion for art at the age of 17 is today one of the most renowned artists specialising in contemporary art from Seychelles, an archipelago in the western Indian Ocean. His works are bought mostly by French and German since he presented a solo exhibition in 2011 in Munich, the largest city in Bavaria, Germany.

As for inspiration, Radegonde said that he draws from a mix of Africa, Asia, and Europe to create. However, most of what he makes is for himself first -- the public’s approval is a secondary thought to him.

Speaking on his future plans the artist said he is currently working on a ten-piece tapestry in the same format as those in the current exhibition. The pieces will be ready in 2020 for his next big exhibition.