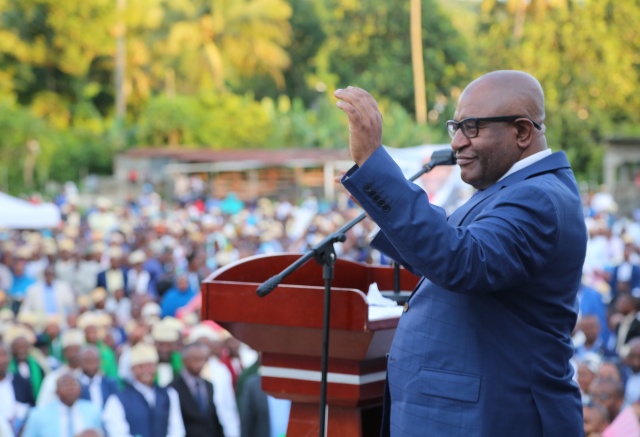 Incumbent Comoros President Azali Assoumani waves on February 24, 2019 during a campaign meeting in Mitsoudje, Hambou region, on Grande Comore, in the Indian Ocean archipelago of Comoros, ahead of March Presidential election. Thirteen candidates have been cleared for the March presidential vote in the Indian Ocean archipelago of Comoros.(Youssouf IBRAHIM / AFP)

(AFP) - Comoros President Azali Assoumani survived an attempt on his life on Thursday as he crisscrossed the country drumming up support ahead of polls on March 24, his campaign director said.

But the opposition insisted the incident on Anjouan island, which Azali's team said left the president unscathed, was "not at all credible".

Tensions are high on the Indian Ocean archipelago after a brief armed insurrection on Anjouan island last year, and Azali's victory in a controversial referendum that could keep him in power until 2029.

"People left explosives at the top of a mountain to cause an avalanche when it exploded" just as Azali's convoy passed, said his campaign director Houmed Msaidie.

"The president's car stopped in time," he added.

Fuses were found at the scene, Msaidie said, adding that the sound of the blast led Azali's military escort initially to suspect a rocket attack.

While no one was hurt in the "attempted assassination... the sole objective was probably to prevent the elections being held," he said.

"But the elections will go ahead despite (this) intimidation," he said at a scheduled campaign rally in Anjouan.

He said that if the incident was confirmed "we condemn it because the only combat should be at the ballot box."

Azali, who first seized power in a coup against an acting head of state in 1999, was returned to office until 2006 in a multi-party vote.

After returning to the presidency in 2016, Azali's critics say that he has taken an authoritarian turn.