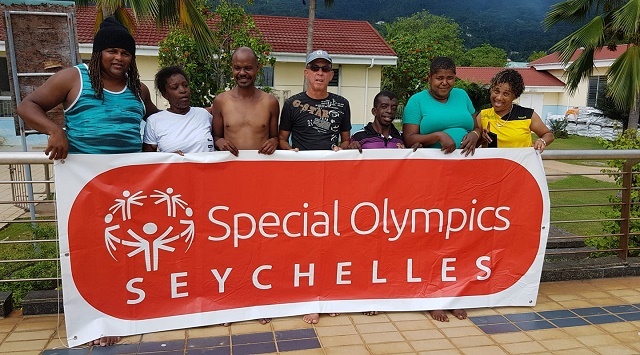 Team Seychelles for the Games in Abu Dhabi at one of the training sessions at the Roche Caiman swimming pool. (Special Olympics Seychelles, Facebook)

(Seychelles News Agency) - Four athletes from Seychelles will participate in the 2019 Special Olympics World Games in Abu Dhabi from March 14-21.

The four athletes left the country on Friday. They are: Suzy Sarakiya and Roland Jeannevol for athletics and Janet Marie and Daniel Accouche for swimming under the guidance of the head of the delegation, Brian Camille.

Speaking to SNA on Friday, Helene Ernesta the national director of Special Olympics Seychelles, said that the athletes have been following intensive training since August last year.

“The athletes have trained in athletics and swimming. I think they are now ready and even if they don't win gold they can still win silver or bronze. They usually get good results in such competitions and I expect them to once again give a good performance,” said Ernesta.

The Seychellois athletes are not new to the Special Olympics international events and most of them have won gold medals.

In the last Special Olympics World Games in Los Angeles in the US in 2015, Accouche won four gold medals in athletics. Sarakiya won gold in the women’s 100 m race in 2011 in Athens, Greece while Jeannevol was part of the Seychelles’ men’s volleyball team that won gold in Minnesota, the U.S., in 1991. Marie also participated in 2015 in athletics.

The concept of Special Olympics was introduced in Seychelles, a group of 115 islands in the western Indian Ocean, in 1986 and the country made its first appearance in the Games in South Bend, Indiana in 1987. Team Seychelles won five gold, two silver and three bronze medals.

Seychelles' best result at a Special Olympics World Games was in Dublin, Ireland, in 2003 when the island nation brought home a total of 28 medals among which were 12 gold, 7 silver and 9 bronze.

More than 7,000 athletes from 170 countries will compete in 24 summer sports in the 2019 World Games which will kick off with the opening ceremony in the iconic Zayed Sports City Stadium in the heart of Abu Dhabi, the largest sports venue in the Persian Gulf.

This will be the first Special Olympics World Games in the Middle East/North Africa region.