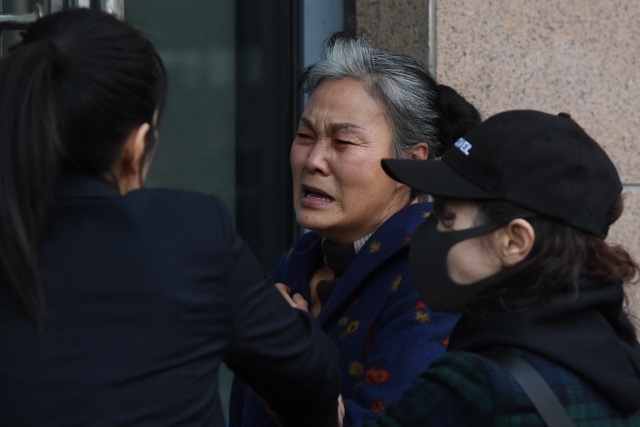 A relative of passengers of missing Malaysia Airlines flight MH370 is helped as she grieves near the Foreign Ministry in Beijing on March 8, 2019. Relatives gathered and demanded to speak with senior representatives of the Foreign Ministry on the fifth anniversary of the plane's disappearance on a flight between Kuala Lumpur and Beijing. (GREG BAKER / AFP)

(AFP) - Emotional relatives of those aboard Flight MH370 Friday demanded answers to one of the world's greatest aviation mysteries and called for the hunt to resume, five years on from the plane's disappearance.

No sign of it was found in a 120,000-square kilometre (46,000-square mile) Indian Ocean search zone and the Australian-led hunt, the largest in aviation history, was suspended in January 2017.

A US exploration firm launched a private hunt last year but it ended after several months of scouring the seabed without success.

Around 50 relatives of Chinese passengers travelled to Beijing from around the country to mark the anniversary and gathered outside the foreign ministry, with some weeping as police officers looked on.

Hu Qiufang told AFP that family members had spent the past year pleading to see the foreign minister but they were only granted a meeting with a low-level official Friday, who told them there were no updates.

"The Chinese government doesn’t listen to us, we feel very helpless," said the 78-year-old, whose son was on the flight.

"As our country, China should be supporting the families."

Jiang Hui, whose mother was on the flight, said he was still haunted by the tragedy: "It's like a living nightmare, the scene replaying in my head.”

Malaysian family members meanwhile called for the search to be restarted.

They were given a glimmer of hope last weekend during a memorial in Kuala Lumpur when the Malaysian transport minister said he was open to hearing proposals to resume the hunt.

"We will continue to do whatever we can to make sure the search goes on," Grace Nathan, whose mother Anne Daisy was on the flight, told AFP.

"As long as there's the possibility of a search, we remain hopeful that the plane can be found."

Jacquita Gonzales, whose husband Patrick Gomes was an MH370 flight steward, said that "every time March comes it's like it was only yesterday that our loved ones went missing -- it's very hard."

In a long-awaited final report into the tragedy released in July last year, the official investigation team pointed to failings by air traffic control and said the course of the plane was changed manually.

But they failed to come up with any firm conclusions, leaving relatives angry and disappointed.

General » Be a reporter: Write and send your article » Subscribe for news alert
Tags: Malaysia, Australia