Focus on unity as Muslims in Seychelles celebrate Eid-ul-Fitr 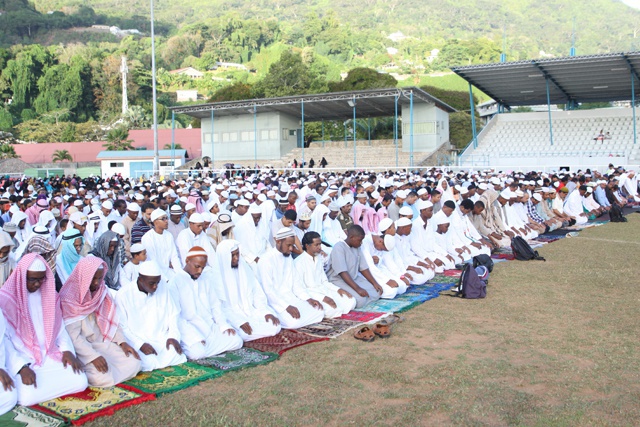 The Muslim community in Seychelles gathered at 'Stad Popiler' for prayers this morning to celebrate Eid marking the end of Ramadan (Joe Laurence, Seychelles News Agency)

(Seychelles News Agency) - The Muslim community in Seychelles gathered at the ‘Stad Popiler’ stadium in the island nation’s capital of Victoria, to celebrate Eid-ul-Fitr. This is the first time that Muslims have gathered in the stadium to mark the end of the holy month of Ramadan.

According to the Islamic Society of Seychelles, the desire behind the gathering was for the various Islamic groups in the island nation of 90,000 people to come together in a united congregation to worship on the day, including Seychellois as well as foreign workers following the Islamic faith.

“It has always been our intention to consolidate the Muslim community, it is not an easy thing, I'm glad that the whole community is united today,” said the President of the Islamic Society of Seychelles, Ibrahim Afif. “We invited everyone to celebrate the end of Ramadan and we are satisfied that everyone has answered the call.”

According to Afif, the Seychelles President James Michel sent a letter to the Muslim community at large this year, wishing them a happy Eid.

The Muslim community in Seychelles is relatively small, at around 2,000 followers, and for them the fasting month is a way of reinforcing their faith.

“You rediscover the pleasure of eating and drinking water after a day of abstinence, it is a pleasure to drink this water and it is an important thing to be able to resist the temptation to eat and drink... but when you have faith, nothing is impossible,” Ahmad Francourt told SNA.

According to the National Bureau of Statistics, 76.2 percent of the Seychelles population is Roman Catholic, 6.1 percent Anglican, 2.4 percent Hindu, 1.6 percent Muslim, and 13.7 percent other faiths.

Imam Idriss Youssouf, the Imam of the ‘Qur'aan and Sunnah Society’, which opened its Mont Fleuri mosque doors late last year on the outskirts of the capital of Victoria, prayed for all Muslims in Seychelles and throughout the world to come together and remain united.

“After the uprisings that occurred in the Arab world, I wanted to send a message of peace and unity to all Muslims,” Imam Idriss told SNA.

Many Muslims in Seychelles had expected the sighting of the new moon that marked the end of Ramadan on Sunday night, but the moon was only sighted on Monday evening, meaning that Eid was only celebrated on Tuesday.

Muslim communities around the world wait eagerly for the first sliver of moon to be sighted to herald in the first day of the month of Shawwal, bringing an end to the fasting month. Eid-ul-Fitr is celebrated by a congregational prayer, followed by a day of family fun and feasting. Men, women and children alike put on their best attire for the day.

Festivities around the world this year were somewhat muted, however, given escalating conflict in Gaza, rising extremism in Iraq and bloody civil war in Syria. Malaysia also marked a solemn Eid ul-Fitr, as families of those who were onboard the downed Malaysia Airlines flight MH17 in eastern Ukraine mourned the dead.