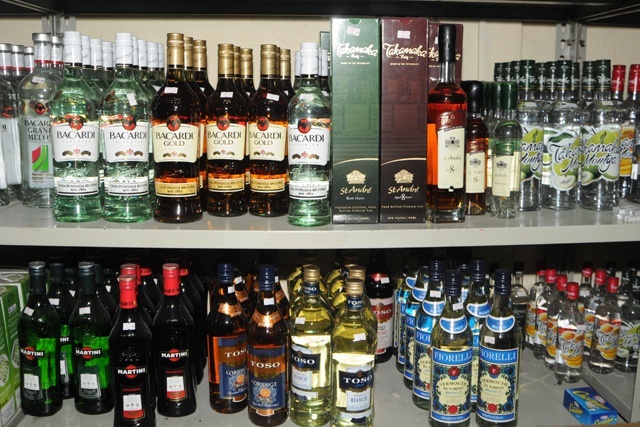 The new measures include separating the sale of alcohol from other commodities in shops. (Joena Meme)

The new measures include separating the sale of alcohol from other commodities in shops, taxing alcoholic products as per alcohol content and a moratorium on licences for local production of alcoholic beverages.

Faure said that as of January 1, 2020, all shops currently selling alcohol and other goods together will have to have physically divide the area where alcohol is displayed.

Selby Payet, a shopkeeper, said that having a separate area to sell alcohol will create a further financial burden for small retail outlets like his.

“Separating my shop means that I will not only have to construct an area to sell alcohol but I will also have to employ another person to work in the new area, which comes at a cost and with risks,” said Payet.

He suggested that instead of coming up with new measures, the existing laws should be strictly enforced. Payet urges shopkeepers to observe the hours at which alcoholic beverages should be sold and welcomes random spot checks from relevant authorities.

Payet added that shopkeepers should be fined or have their licences revoked if found selling alcohol outside the designated time.

A producer of a local rum brand, Zack Liapoun, on the other hand, said that having a different area to sell alcohol is good as “minors won’t have access to alcohol.”

“There is still the practice today where minors are buying alcohol and cigarette for their parents,” he said.

On the subject of altering the manner in which alcoholic products are taxed, Liapoun said “on one side it is a good thing as there are many and different kind of alcohol being imported into the country, but on the other side, such a measure does not support local producers.”

As for the moratorium, effective since February 26, Liapoun said that not issuing licences for local production of alcohol will encourage people wanting to venture in the alcoholic business to import such products.

“Licences have to be issued with control. What should be done is introduce a quota where a defined number of companies can produce different types of alcoholic beverage,” he said.

The deputy chief executive at the Agency for Prevention of Drug Abuse and Rehabilitation (APDAR), Geralda Desaubin, said that the agency welcomes all the measures.

“We see these measures as a commitment that the government has made in the fight against drug and alcohol abuse. It is also a form of support especially when it comes to the mandate that they have given to APDAR to deal with the drug and alcohol situation in the country,” said Desaubin.

She added that “these are things that we envisioned and had started to talk about. The measures are in line with our mandate and future objectives of the agency.”

Desaubin also said that the alcohol problem in the Seychelles, an archipelago in the western Indian Ocean, is not something the government, the agency, and other partners will be able to solve in isolation.

“The problem affects the country and population as a whole, so finding the solution depends on the society as a whole together with stakeholders and the community itself to help manage and resolve the problem. We feel that the steps being taken will help greatly to make the situation better,” she said.

President Faure announced other measures which included the need to regulate advertisement and marketing of alcohol, review the Employment Act to deal with employees working under the influence and not renewing shopkeepers’ licences for the sale of alcohol in the market street in the capital Victoria.

General » Be a reporter: Write and send your article » Subscribe for news alert
Tags: Agency for Prevention of Drug Abuse and Rehabilitation, Employment Act