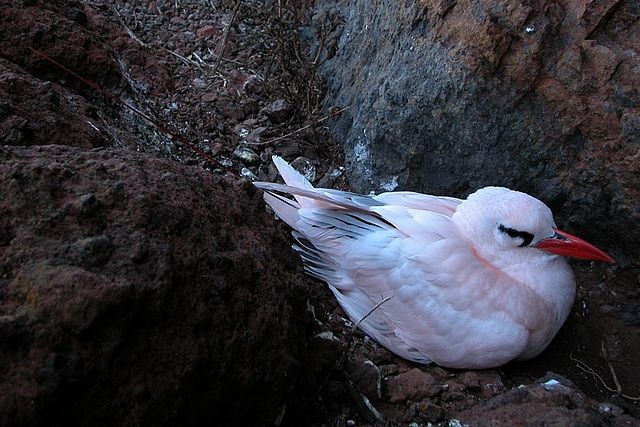 Attacks on the nests and eggs being eaten by predators such as rats and crows were one attribution to the decline in breeding. (Glen Fergus, Wikimedia Commons) Photo License: (CC BY-SA 2.5)

(Seychelles News Agency) - The population of tropicbirds is declining in Seychelles, in part because of attacks on nests by predators, a recent study found.

Scientists from the Queens College in Oxford started to study the two species of the bird – red-tailed tropicbird and the white-tailed tropicbird - in 2017. The study of the birds -- which are native to two islands in Seychelles -- is expected to be completed at the end of this month.

Preliminary findings were presented to local conservationists and students at the University of Seychelles (UniSey) earlier in March.

“The breeding success of both species on Aldabra is quite low and the population of the red-tailed tropicbird is on the decrease. On Aride, it is the other species, the white-tailed tropical whose population is declining,” said Annette Fayet, a researcher at the college.

Attacks on the nests and eggs being eaten by predators such as rats and crows were one attribution to the decline in breeding.

Tropicbirds are not endemic to the Seychelles – a group of 115 islands in the western Indian Ocean. The two species are both white and can be differentiated from their elongated tail, one which is white and the other red.

The species have established colonies on Aride - managed by an environment not for profit organisation, Island Conservation Society, and on Aldabra Atoll, a UNESCO World Heritage Site, managed by the Seychelles Islands Foundation.

“Seabirds play an important role in the ecosystem and definitely if there is a decrease in the population we must find the cause because the more of the species the healthier the ecosystem,’ said Dias.

The director explained that “we have always had a healthy bird population but with climate change, human pressures amongst others the seabirds are under threat. We need such researches because now we need to know the causes, action on the findings and mitigate these threats as a means of ensuring the conservation of these birds.”

Fayet said that generally worldwide the population of seabirds are being affected. “What I wanted to know is where in the sea the birds get their food. What they eat and how they interact with the sea and use marine resources, because if they do not get enough food this may impact their breeding” explained Fayet.

As part of the research, Fayet had to understand the feeding ecology of the tropicbird and how that affects its breeding success.

“The use of miniature state-of-the-art GPS tracking devices - funded by the Africa Oxford Initiative - were used to follow the birds' movements at sea, while they go on feeding trips. This was done in an attempt to understand their feeding range and important feeding areas,” explained Nasreen Khan, a research officer on Aride island.

According to Khan, “this study will help complement Aride’s yearlong breeding success monitoring because lack of food resources can have a dramatic impact on seabirds’ breeding success, therefore understanding the birds’ feeding ecology is key to understanding potential threats they face and how to help protect them.  Nests were further monitored by motion-activated cameras to understand breeding biology linked to chick feeding rate.”

“Information about the species are still being collected on Aride and Aldabra. That done we will compile all the data, analyze same, look at the birds' movement and compare data from Aride to that of Aldabra,” said Fayet.

The researcher added that the results will be then published so that the public as well ministries and relevant partners can have access to the information so that in the end policies can be made to better protect the tropicbirds of Seychelles.

“When it comes to the sea, we still need to know how and where this can be done. Now with the kind of technology used in the study, we have an idea,” explained Rocamora, who added that “we can use such to find out information about where these birds feed, not only tropicbirds but others as well. Once this is established, we can propose measures to protect these feeding areas.”