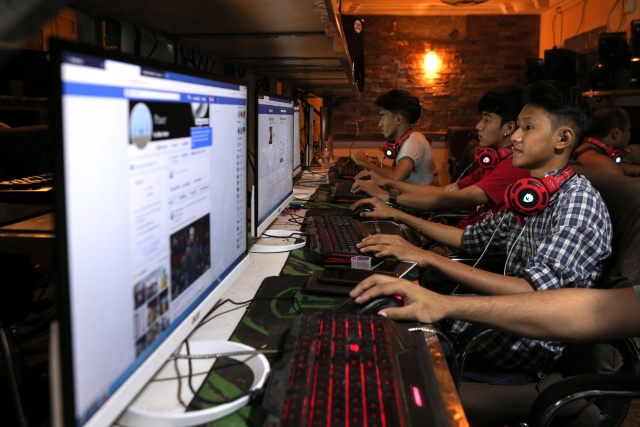 (FILES) As Facebook approaches its 15th anniversary, the social network has made strides toward Mark Zuckerberg's goal of connecting the world. But it has also made some huge missteps that has turned some of its friends into enemies. The online social network founded on February 4, 2004 in Zuckerberg's Harvard University dorm is now in an adolescence with grown-up burdens of being held accountable for its behavior and playing in a world where people can be nasty.(NOAH BERGER / AFP)

As the outage continued, gripes flooded rival Twitter as well as a comments section on downdetector.com, which tracks trouble accessing online pages.

"I have never seen Facebook down this long," one user lamented.

"And many other sites and apps are having issues too."

"This is very bad. Seriously this is not something funny or worth the amusement to even troll about."

Some media outlets branded the outage as the biggest in Facebook's history.

The outage, of unknown origin, also affected Facebook-owned Instagram, as well as Messenger.

In some cases the apps could be accessed but would not load posts or handle missives.

The California firm which has more than two billion users acknowledged the outage after users noted on Twitter they could not access Facebook or had limited functionality.

"We're aware that some people are currently having trouble accessing the Facebook family of apps. We're working to resolve the issue as soon as possible," a Facebook statement said on Twitter.

A short time later, Facebook indicated the outage was not related to an attack aimed at overwhelming the network.

"We're focused on working to resolve the issue as soon as possible, but can confirm that the issue is not related to a DDoS attack," Facebook said.

The social network said there was no update of the situation as evening arrived in California.

Last November, a Facebook outage was attributed to a server problem, and a September disruption was said to be the result of "networking issues."

While the outage continued, The New York Times reported that US prosecutors have launched a criminal investigation into the social network's practice of sharing users' data with companies without letting its members know.

A grand jury in New York has subpoenaed information from at least two major smartphone makers about such arrangements with Facebook, according to the Times.

Regulators, investigators and elected officials in the US and elsewhere in the world have already been digging into the data sharing practices of Facebook, which has more than two billion users.

The social network's handling of user data has been a flashpoint for controversy since it admitted last year that Cambridge Analytica, a political consultancy which did work for Donald Trump's 2016 election campaign, used an app that may have hijacked the private details of 87 million users.

"It has already been reported that there are ongoing federal investigations, including by the Department of Justice," a Facebook spokesman said in response to an AFP inquiry.

"As we've said before, we are cooperating with investigators and take those probes seriously. We've provided public testimony, answered questions, and pledged that we will continue to do so."

Facebook has shared limited amounts of user data with smartphone makers and other outside partners to enable its services to work well on devices or with applications. Regulators, and now prosecutors, appear intent on determining whether this was done in ways that let users know what was happening and protected privacy.

The social network has announced a series of moves to tighten handling of data, including eliminating most of its data-sharing partnerships with outside companies.

The focus of the grand jury probe was not clear, nor was when it started, according to the Times, which cited unnamed sources.

General » Be a reporter: Write and send your article » Subscribe for news alert
Tags: US, IT, Lifestyle, Facebook, outage