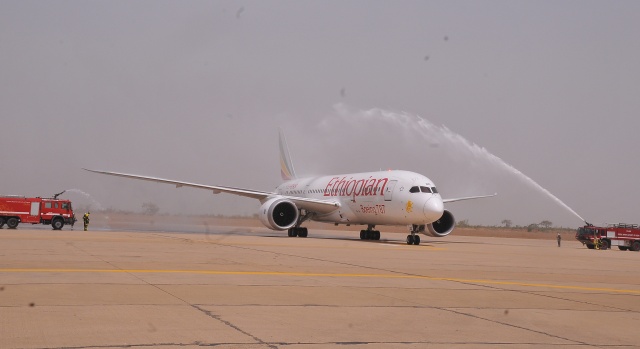 An Ethiopian Airlines Boeing 787 from Addis Ababa, is seen after landing in Kaduna, some 190 kilometres (120 miles) to the north, on March 8, 2017. Nigeria's capital was cut off by air today, as Abuja airport is closed for at least six weeks for repairs, forcing flights to divert and lengthening travel times for passengers. (STRINGER / AFP)

(AFP) - Ethiopian Airlines, whose jet crashed on Sunday after takeoff from Addis Ababa, has grown into Africa's largest airline as it has used its modern fleet to serve destinations across the continent.

Founded in 1945, it has in recent years outgrown its continental rivals South African Airways and Kenya Airways, both of whom are losing money while Ethiopian has ordered new planes and opened new routes.

The state-owned carrier serves 119 international destinations with a fleet of more than 110 planes based in its Addis Ababa hub, including the ultra-modern Airbus A350 and Boeing 787 Dreamliner.

Ethiopian's website said it operates the youngest fleet of aircraft in Africa.

Besides serving global hubs like Beijing, Paris, London and Washington, Ethiopian flies to smaller African cities with few international connections like Enugu in Nigeria, Nosy Be in Madagascar and Mbuji-Mayi and Lubumbashi in DR Congo.

The strategy has paid off, with revenue hitting $2.7 billion (2.4 billion euros) in 2017-2018 and Addis Ababa overtaking Dubai last year as the main transit airport for people arriving in sub-Saharan Africa.

With around 65 aircraft on order and new routes announced regularly, Ethiopian has made expansion its goal.

The Sunday crash of Flight 302, which plunged into the ground and killed all 157 onboard minutes after take-off to Nairobi, is a setback for the carrier.

In response, it's grounded all six of its Boeing 737 MAX 8 aircraft, the model involved in the disaster.

Boeing has faced questions over the 737 MAX 8 since last October, when that same model operated by Lion Air crashed after takeoff in Indonesia, killing all 189 people onboard.

The Sunday crash was the first fatal incident for Ethiopian since February 2010, when 90 people were killed after a flight to Addis Ababa from Beirut crashed off the coast of Lebanon.

In 2014, the co-pilot of an Ethiopian flight hijacked the plane and forced it to land in Geneva so he could claim asylum.

An Ethiopian court later sentenced him to more than 19 years in prison for the takeover in which no one was injured.

In 2015, the three-person crew of an Ethiopian cargo jet was injured when the plane skidded off the runway after landing in Accra, Ghana.