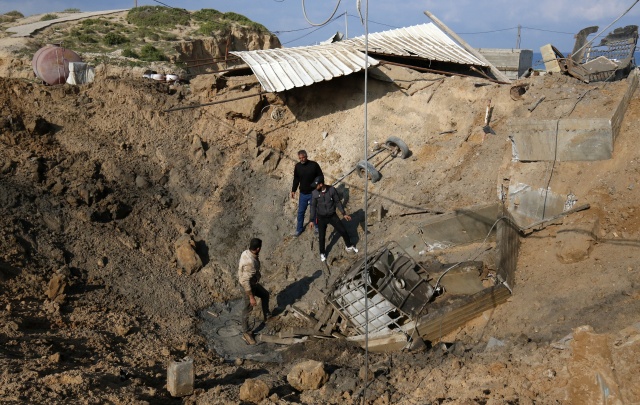 Palestinian men check the damage following an Israeli air strike targeting a site belonging to Gaza's Islamist rulers Hamas, in Khan Yunis in the southern Gaza Strip March 7, 2019. A Palestinian teenager was killed by Israeli fire during renewed clashes along the Gaza border overnight, the health ministry in the strip said, with Israel striking a Hamas position in response to the violence. A Palestinian security source said a Hamas base was struck in southern Gaza, causing damage but no injuries. (SAID KHATIB / AFP)

(AFP) - Israel said Friday its aircraft hit around 100 Hamas targets in the Gaza Strip overnight in response to rocket fire from the Palestinian enclave, including toward its economic capital Tel Aviv.

"Fighter planes, attack helicopters and (other) IDF aircraft attacked overnight about 100 terror targets of the Hamas terror organisation in the Gaza Strip," Israel's military said in a statement.

It said targets included an office complex allegedly used by Hamas to coordinate militant operations in the occupied West Bank.

Another was a "the main manufacturing site of standard-grade rockets in the Gaza Strip," an underground location, it said.

A security source in Gaza said dozens of strikes targeted bases belonging to both Hamas and its ally Islamic Jihad throughout Gaza.

More than 40 locations were targeted with about 100 strikes, the source said.

A couple was injured when their house was damaged in Rafah in the southern Gaza Strip, according to the source.

Residents reported a number of rockets being fired back at Israel in response.

No Israelis had been reported wounded.