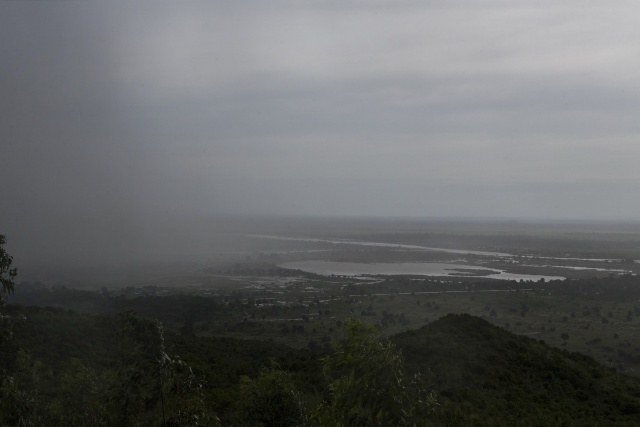 Rain, which is believed to be the beginning of Tropical cyclone Idai coming from central Mozambique, falls in the flooded districts of Chikwawa and Nsanje in southern Malawi, on March 15, 2019. At least 56 people have died in flood-hit areas as of March 13, according to the government, while 577 had been injured and almost 83,000 people have been displaced. (AMOS GUMULIRA / AFP)

"There is no communication with Beira. Houses and trees were destroyed and pylons downed," an official at the National Institute of Disaster Management (NIDM) told AFP.

Authorities had to close Beira international airport after the air traffic control tower, the navigation systems and the runways were damaged by the storm.

"Unfortunately there is extreme havoc," said the official.

"The runway is full of obstacles and parked aircrafts are damaged."

Late on Wednesday, the national carrier LAM cancelled all flights to Beira and Quelimane, which is also on the coast, as well as to Chomoio, which is inland.

Power utility Electricidade de Mocambique said in a statement that the provinces of Manica, Sofala and parts of Inhambane have been without power since Thursday.

Officials did not report any confirmed deaths, but local Beira station STV reported a child had died in Manica province west of the city, apparently the victim of a falling roof.

"There was no tsunami-type storm but Beira and Chinde (400 kilometres, 250 miles northeast of Beira on the coast) were badly hit," added the NIDM official.

Another official, Pedro Armando Alberto Virgula, in Chinde, said a hospital, police station and seven schools there lost their roofs and four houses were destroyed.

Virgula added that efforts were under way to assess the damage caused after Idai made landfall late on Thursday.

The World Food Programme (WFP) said it would move 20 tonnes of emergency food aid to the affected areas.

The UN Office for the Coordination of Humanitarian Affairs (OCHA) had warned that the storm could pack winds of up to 190 kilometres per hour (118 miles per hour).

At least 126 people were killed by the downpour that has struck parts of Mozambique, Malawi and South Africa over the past week, officials said.

Heavy rains in neighbouring Malawi have affected almost a million people and claimed 56 lives, according to the latest government toll.

Authorities there have opened emergency relief camps where malaria and shortages of supplies have led to dire conditions, according to AFP correspondents.

Mozambique's weather service has warned that heavy rain will continue to batter Beira and surrounding areas until Sunday.

The UN warned of damage to crops, "including about 168,000 hectares (415,000 acres) of crops already impacted by flooding in early March, which will undermine food security and nutrition".

Mozambique and Malawi, two of the poorest countries in the world, are prone to deadly flooding during the rainy season and chronic drought during the dry season.

In neighbouring Zimbabwe, weather services have warned that violent thunderstorms, lightning and strong winds will be experienced in the eastern regions of the country.

Africa » Be a reporter: Write and send your article » Subscribe for news alert
Tags: Mozambique, weather