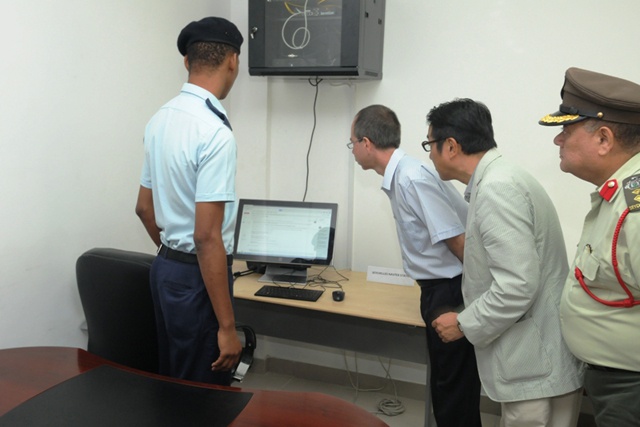 (Seychelles News Agency) - The government of Japan has donated a Navtex broadcasting station to the government of Seychelles as part of efforts to fight piracy and boost maritime safety for ships in the Western Indian Ocean.

Seychelles, which is a signatory of the Djibouti Code of Conduct of the International Maritime Organization (IMO), will use the equipment to broadcast navigational and meteorological warnings, rescue information and pirate attack warnings to vessels up to 400 nautical miles away from the main island of Mahé.

According to a report in the Seychelles Nation, the equipment was handed over to the island nation’s Minister for Home Affairs and Transport Joel Morgan by the special advisor to the secretary general of the IMO, Yoshiaki Ito, on Monday at the Seychelles Coast Guard (SCG) base at Ile Perseverance.

At the handover ceremony, Ito praised the Seychelles, saying that although island state had been hard-hit by the effects of piracy, the government had been proactive in building its capacity to fight piracy and increase maritime safety of its own accord.

“Furthermore, we see the government of Seychelles offering to assist Somalia in building capacity for managing Illegal, Unreported and Unregulated (IUU) fishing. This demonstrates the spirit of cooperation and inter-regional support that the Code aims to foster,” he added.

The equipment, which will be operated by the SCG, includes a Navtex broadcast station as well as radio and satellite voice communication equipment.

Navtex, which is an acronym for Navigational Text, was first developed in Britain in the 1970s and started to be introduced to other countries in 1987. The system uses medium-frequency signals to send weather forecasts, navigational and meteorological warnings, as well as urgent marine safety broadcasts to ships.

“The arrival of the Navtex today is indeed a plus for Seychelles as we move towards the IMO white list, a significant step for our country and for our maritime industry and trade. It will be a seal of recognition that we are compliant with the International Convention on Standards of Training, Certification and Watch keeping for Seafarers (STCW), a convention prescribing minimum standards to which countries are obliged to meet or exceed,” said Minister Morgan after receiving the equipment.

“The Navtex station is going to be used to send safety information to seafarers,” said the Director General of the Seychelles Maritime Safety Administration (SMSA), Captain Joachim Valmont. “This system will enhance our service more and it will enable us to broaden our service to include smaller vessels. Since we have not been spared pirate attacks, we will be able to alert vessels in real time.”

With the main antenna located atop Mont Josephine and several smaller ones at the SCG that transmit the vital information to vessels, Captain Valmont said that the SMSA would recommend that all vessels in local waters install Navtex receivers. He added that he would look into ways of helping local boat-owners to acquire the equipment, the cost of which could be prohibitive for some.

The deputy chief of mission of Japan to the Republic of Seychelles, Mikio Mori, explained why Japan placed such importance in providing assistance to Seychelles, particularly in the field of maritime security.

“In June 2013, during Ticad V, His Excellency Prime Minister Shinzo Abe stressed the importance of peace and security as a prerequisite for socio-economic development in Africa. In this regard Ticad V Yokohama Action Plan 2013-2017 encourages African countries to adopt measures that ensure the safety and security of maritime navigation, shipping and related activities. As an island country, safety at sea is all the more important for Seychelles.”